How a car handles on the road is determined by a number of different factors. For example, if it is understeered or oversteered, and whether it is front, rear or four-wheel drive.

The condition of the tyres, wheels, brakes, shock absorbers and steering system also have a major impact on the car's driving characteristics and roadholding. 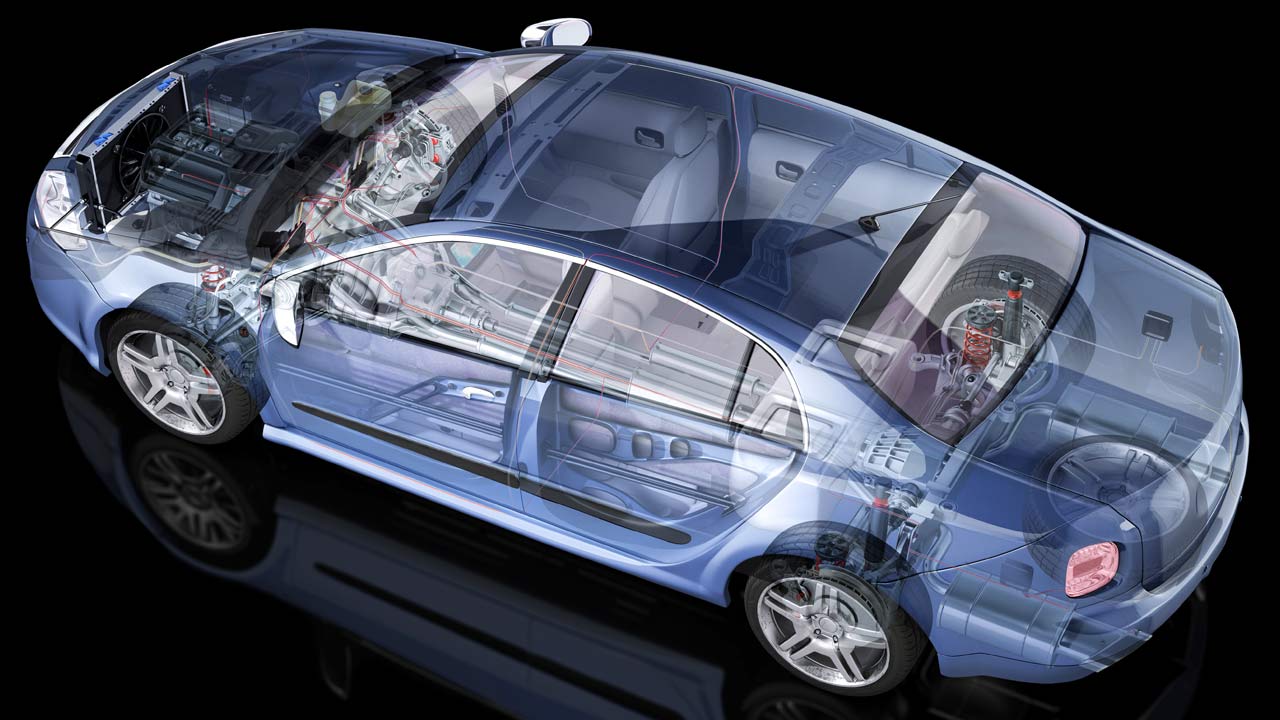 Side force and roadholding

In order to keep a vehicle on the road, grip, which is the friction between the tyres and the road, must be sufficient. Grip is reduced by rain, snow and ice, pollution such as oil and unevenness such as gravel. Grip is also affected by the quality and condition of the tyres.

The best grip is on dry asphalt. But if the asphalt is wet and muddy or newly laid, grip can become much worse. In such circumstances the grip on a hard-packed gravel road may actually be better than on an asphalt road.

When deciding which speed is appropriate in a particular situation, you must always take grip into account. 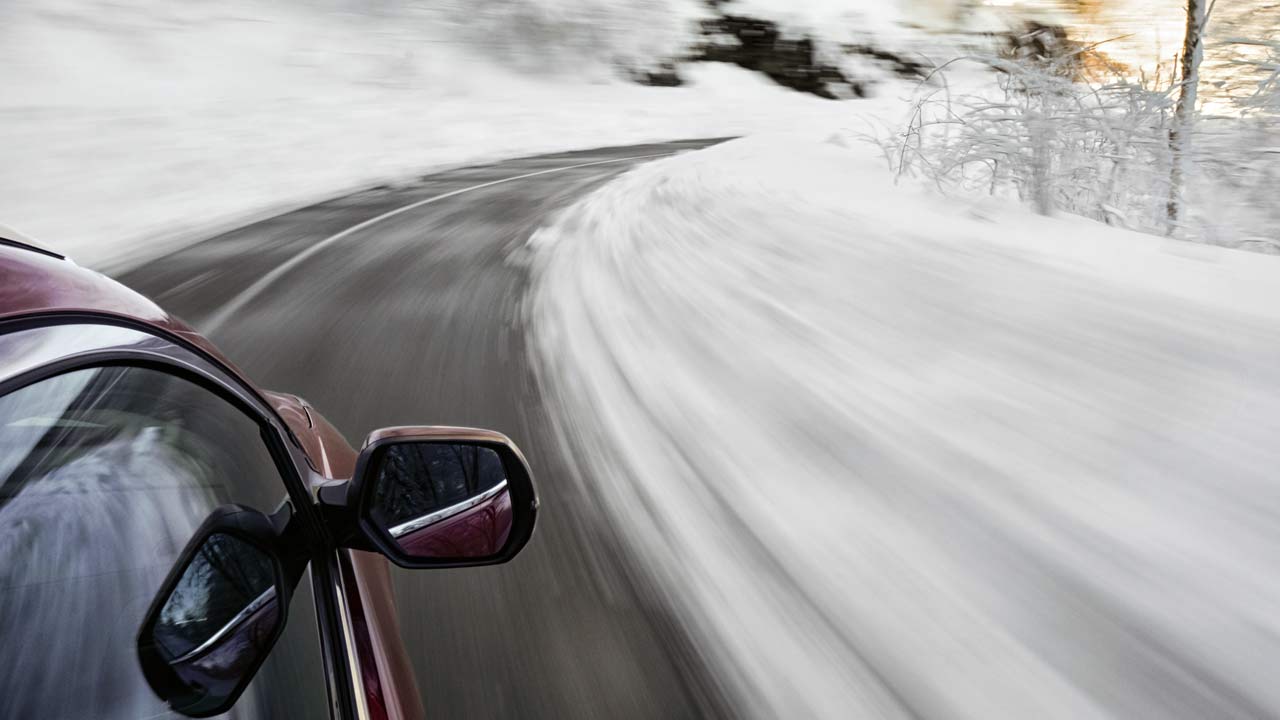 Drive extra carefully in curves and when grip is bad 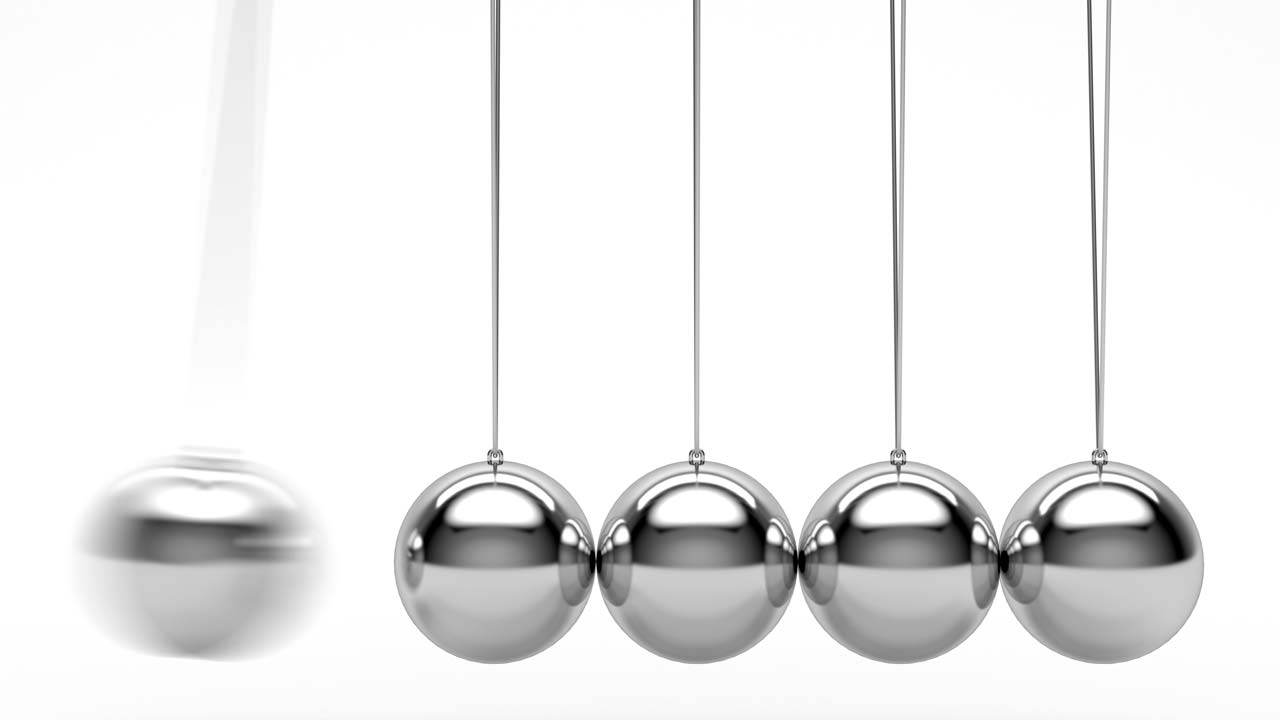 In other words, the forces at high speeds are always great. If you misjudge or underestimate the car's kinetic energy, you run the risk of not being able to stop the car in time – which, in the worst case, can lead to a serious accident.

Cars are either understeered or oversteered by design, but depending on the circumstances, the same car can quickly switch between under and oversteering.

During normal driving conditions, it is difficult to know if the car is under or oversteered. It is only when the tyres begin to lose grip that you really feel the difference.

An understeered car turns less than you want it to and strives to go straight ahead in curves. This is because the front tyres do not have enough grip.

The illustration shows a car understeering in a curve, which makes the car continue almost straight ahead even though the driver is turning the steering wheel

Most modern passenger cars, especially those with front-wheel drive, are somewhat understeered as that is considered the safest. This is because understeering requires less of the driver than oversteering. But if a car for some reason understeers too much, the car will become very difficult to safely manoeuvre.

Understeer can be caused when: 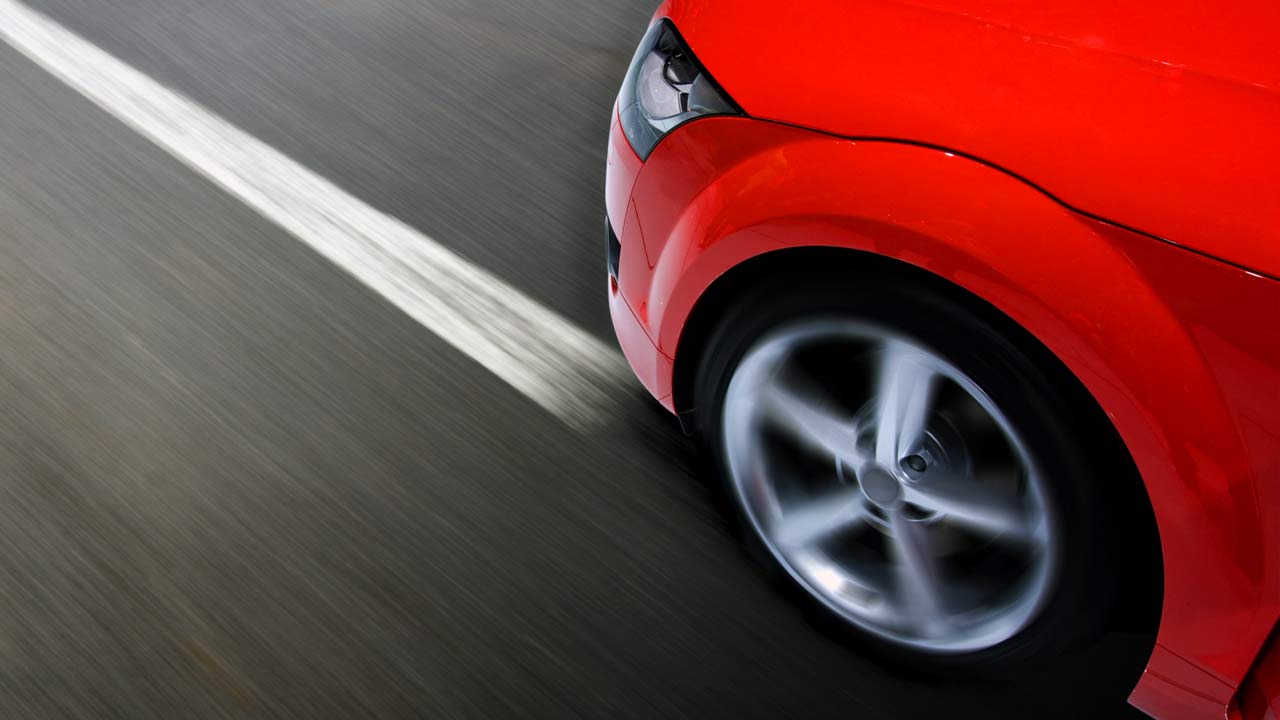 An oversteered car does the opposite and turns more than you want it to. This is because the rear tyres do not have enough grip. Oversteer can result in rear-end skidding which means that the car's rear tries to pass the car's front, so that the front of the car points more and more inwards. This could, in the worst case, lead to a serious side-on collision, which is the most dangerous type of collision (cars are less protected on the sides).

Oversteer is most common in rear-wheel drive cars and is particularly noticeable when accelerating in curves, but can also be caused when:

An uneven road surface can also cause a car to oversteer, even if the driver is only driving straight ahead, and has not turned the steering wheel.

Electronic stability control systems such as ESP, ESC or DSTC are systems that detect and assist when the car is about to start skidding. When the system detects loss of steering control, it automatically brakes individual wheels, preventing the skid. Some systems can also throttle the engine if required. 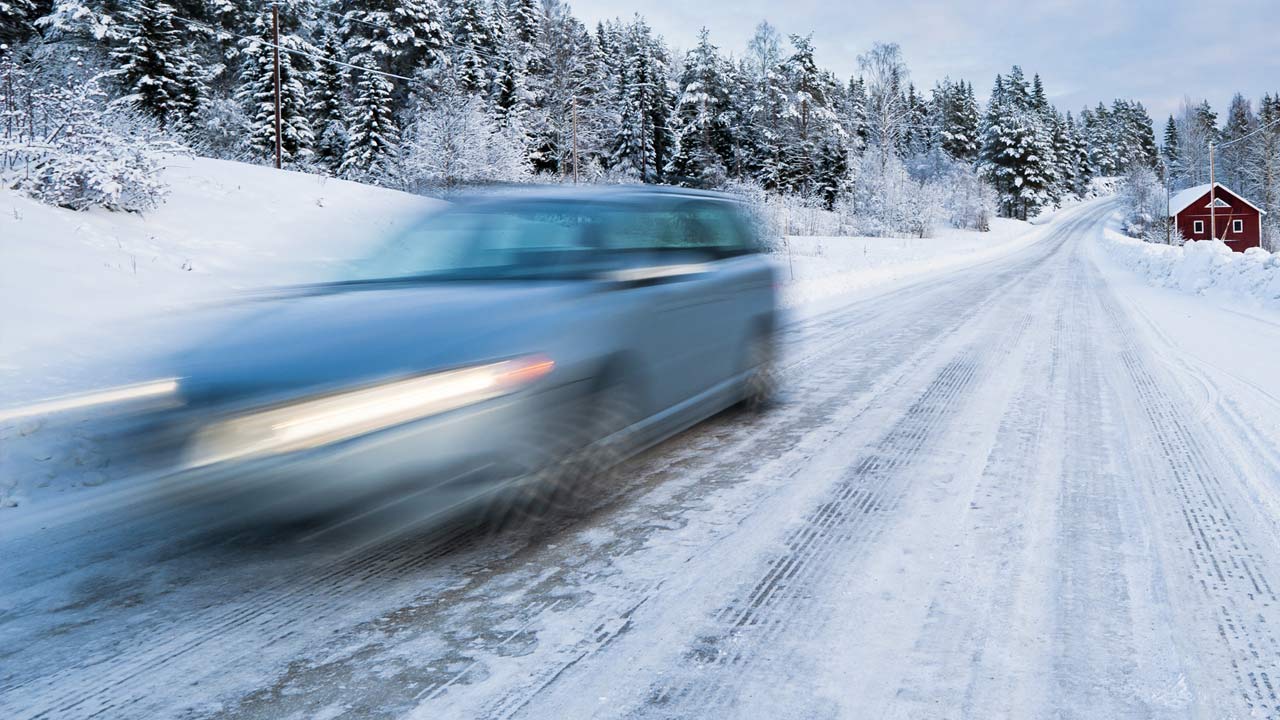 ESC can prevent the car from skidding by braking individual wheels, or throttling the engine

Electronic stability control systems significantly reduce the risk of accidents, but they do not and cannot change the laws of physics. If you drive too fast for the road conditions, you can still lose control – even in a car with ESC. Never solely rely on the car's technology. You must always adapt the speed, distance ahead and your driving according to visibility, road surface condition and the prevailing traffic situation.

Tyres are a crucial component affecting a car's driving characteristics. To maximise grip and minimise the risk of rear-end skidding and side-on collision, the best tyres should always sit on the rear axle, even in winter. This applies to both rear, front and four-wheel drive cars.

A decisive factor for grip is the tyre tread depth and condition. Tyres older than 10 years should be replaced as tyre friction properties deteriorate over time.

Check the tread depth at regular intervals using a tyre depth gauge. In the picture below you can see how it is done. 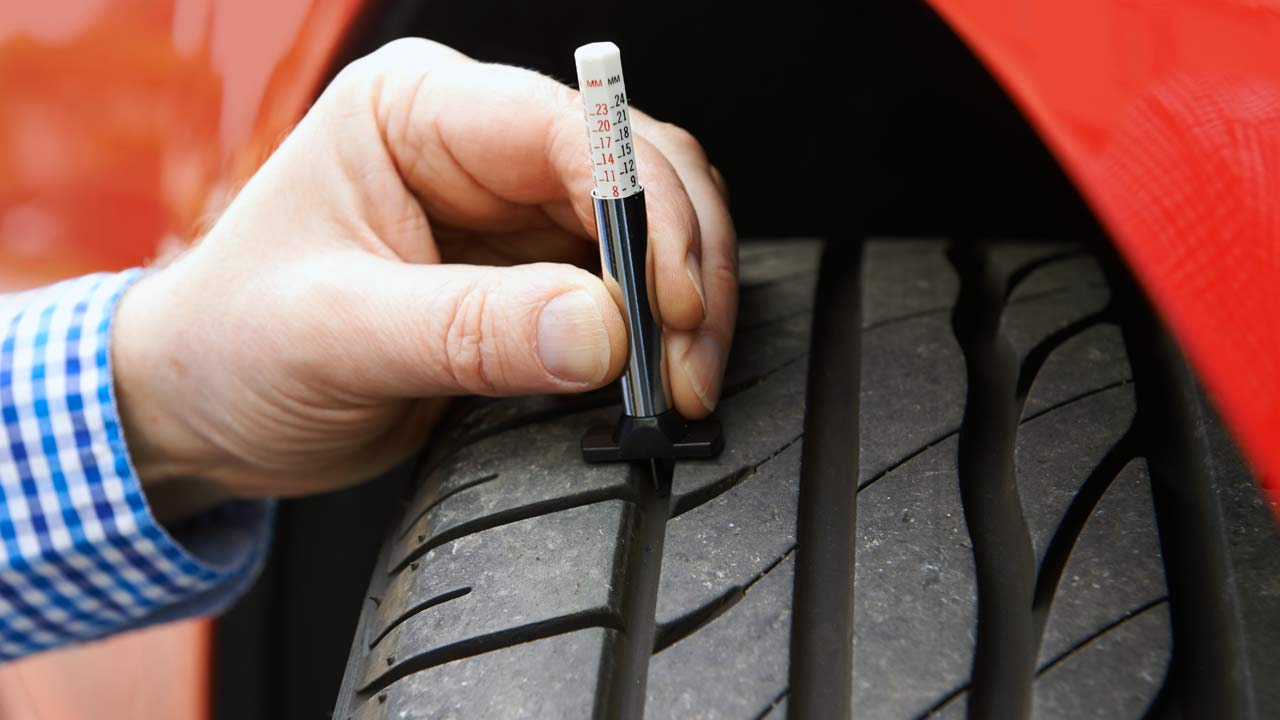 Summer tyres must have at least 1.6 millimetres of tread depth 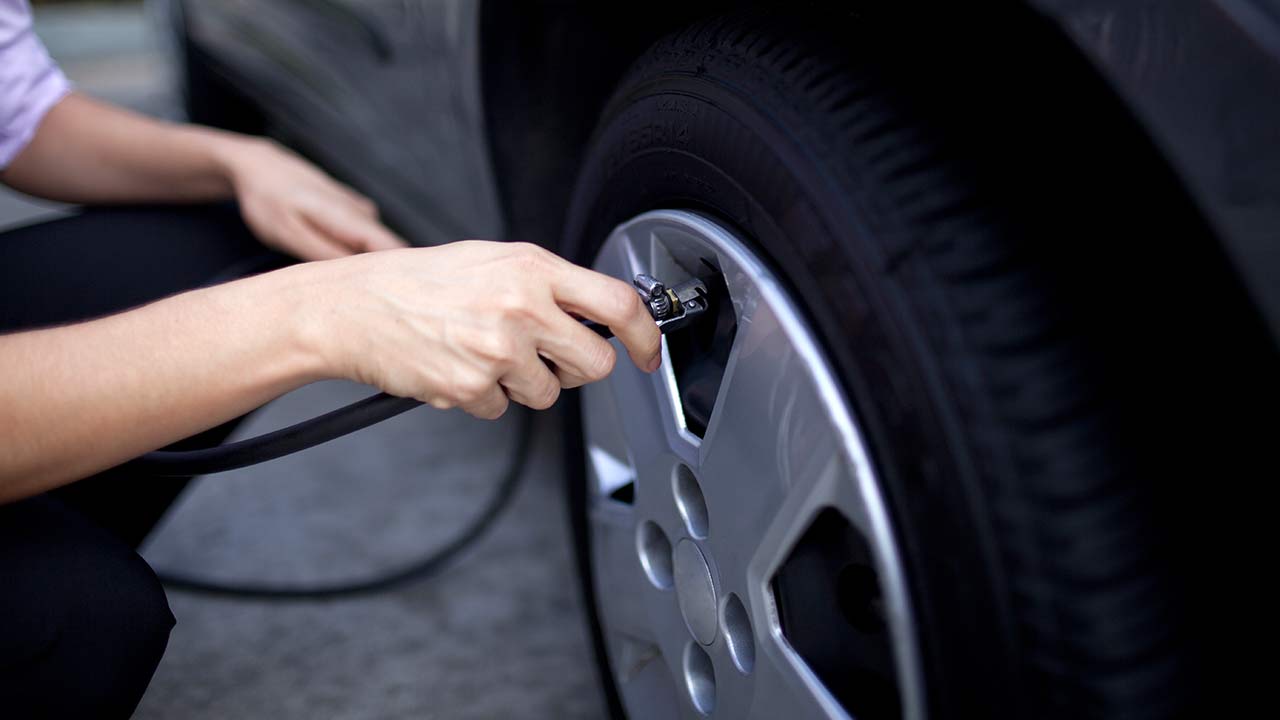 Check the tyre pressure at least once a month

Getting a flat tyre while traveling is unusual but may happen. You can drive at least a couple of hundred meters on a flat tyre, so it is better to drive to a suitable place to stop than to stop directly in the middle of the road, where you pose a danger to the traffic behind.

After a change of wheels it is important to retighten the wheel nuts when you have driven about 50-100 kilometres. Otherwise you risk a wheel nut or an entire wheel coming loose during travel.

This is especially important to remember if your wheel rims are alloy (light metal). Note that such rims should be tightened with a special torque wrench to avoid damaging them. 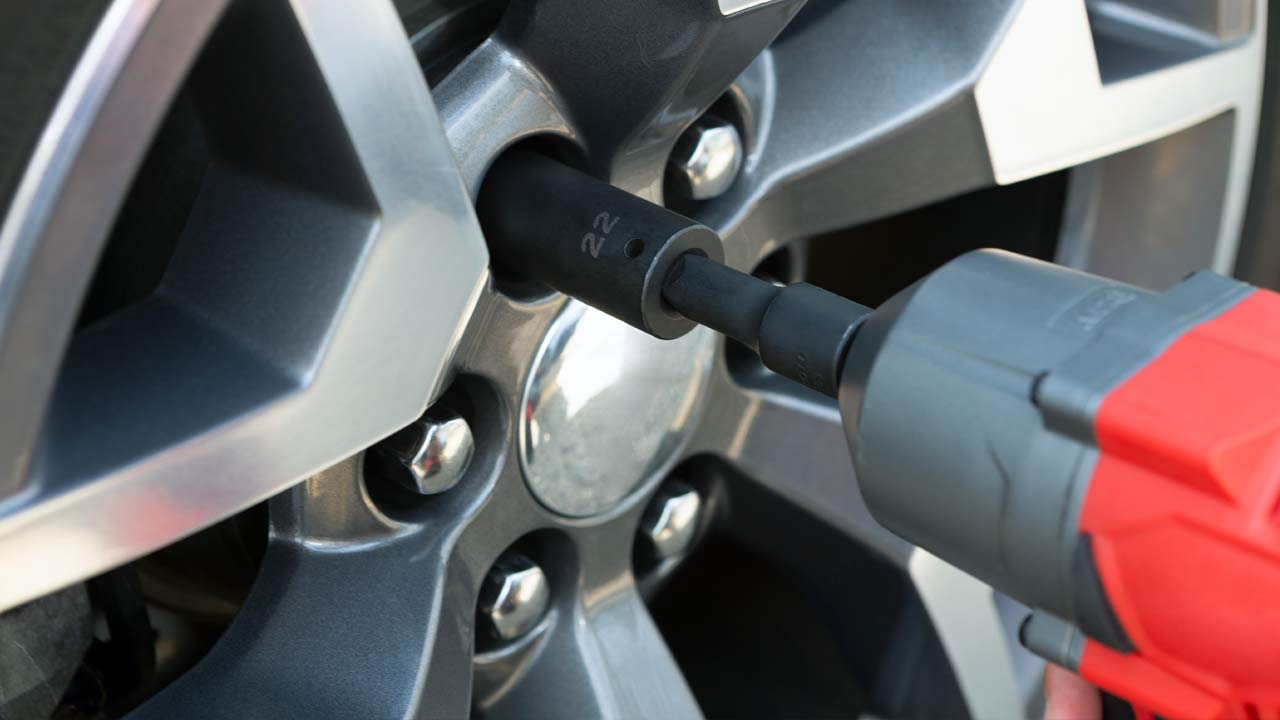 If the car pulls diagonally when driving on a straight road, the air pressure in one of the front tyres is probably too low, or, the wheel alignment is incorrect.

If the wheel alignment is incorrect, the outer edges of the front tyres will also wear faster than the rest of the tyres.

If the steering wheel shakes at a certain speed, the wheels are incorrectly balanced or some part of the steering system is worn.

If the wheels are incorrectly balanced, unevenly worn patches usually occur on the tyres as well. 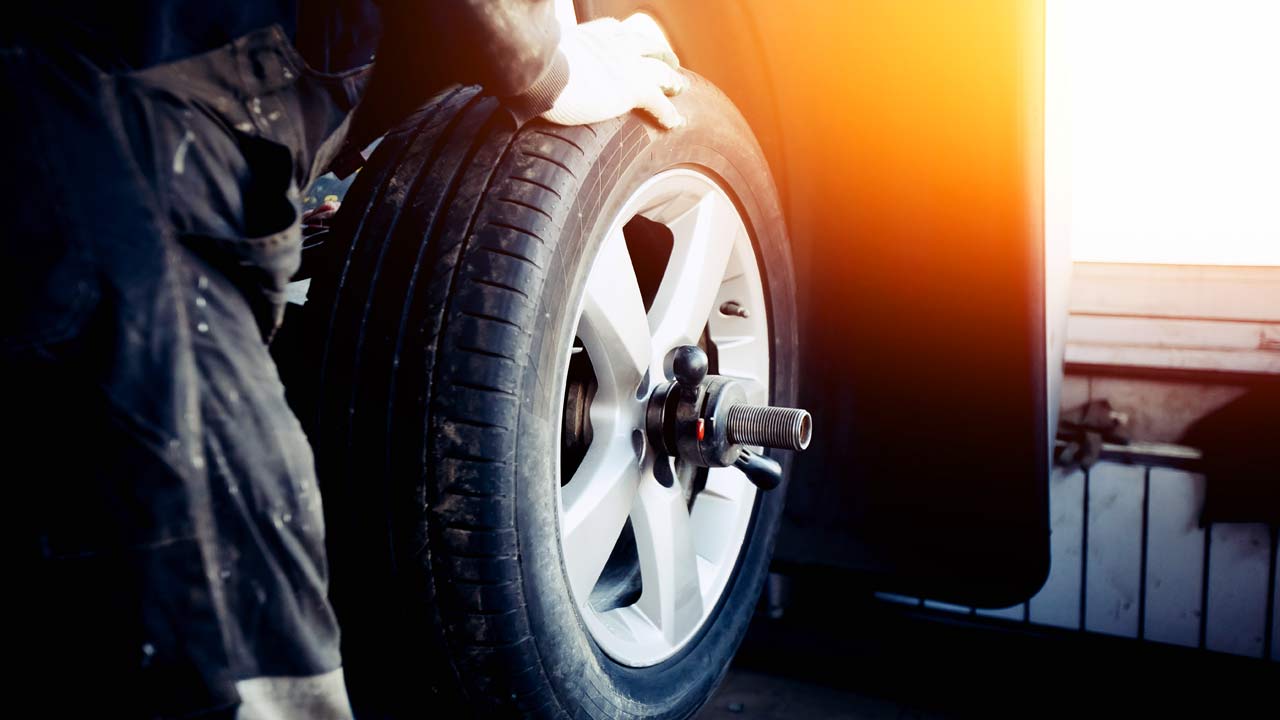 If the steering wheel shakes at a certain speed or if unevenly worn patches occur on the tyres, the wheels probably need to be balanced in a workshop

Emergency wheels should have higher air pressure than regular tyres. The recommended pressure should be indicated on the wheel and in the instruction manual. 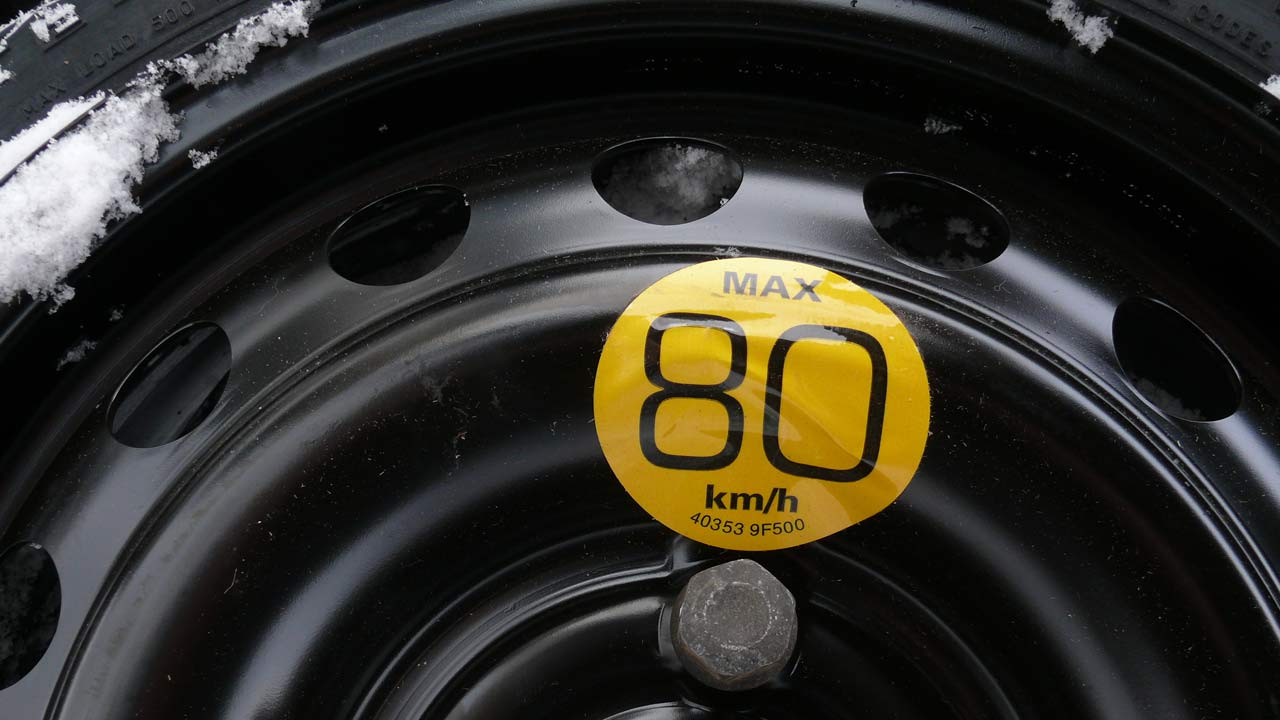 Read more about the car's brakes

A car's shock absorbers contribute to better road holding and comfort by minimising rocking movements and impacts on the car's chassis (undercarriage).

Worn shock absorbers result in impaired grip – especially in curves and when braking – and braking performance. If the rear shock absorbers are in poorer condition than the front, the risk of rear wheel skid increases. 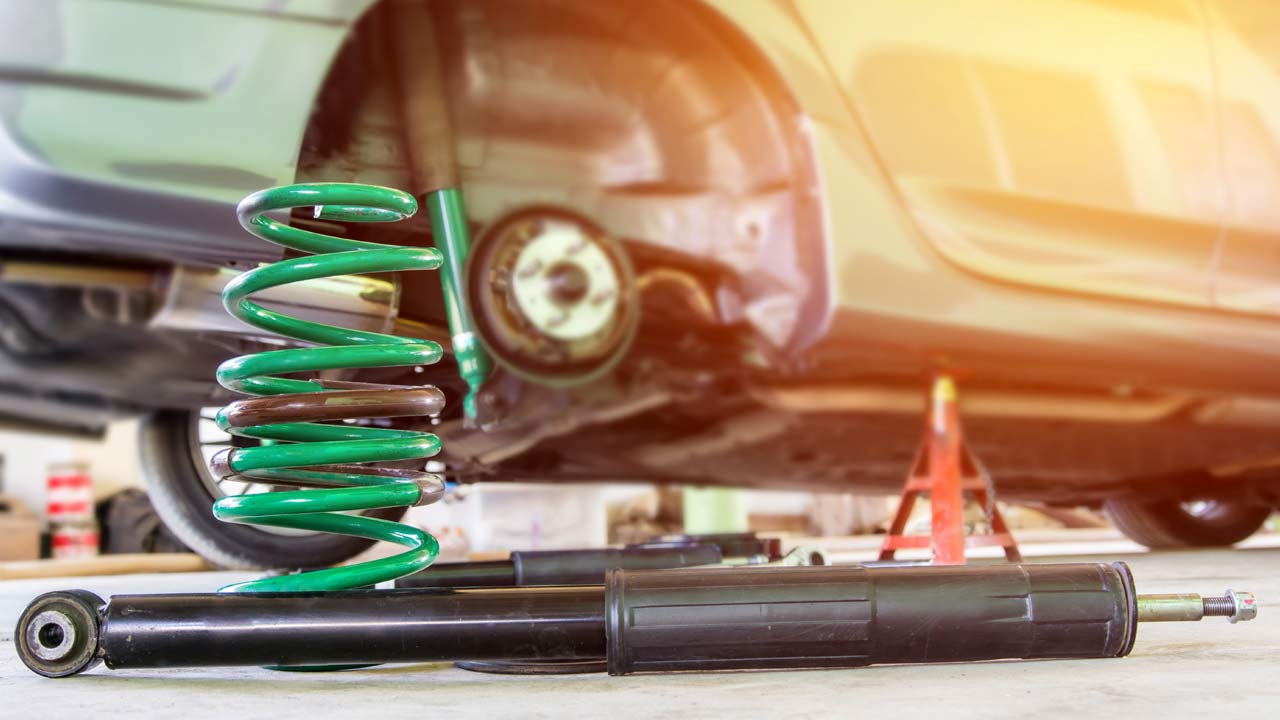 Rear-wheel drive cars are becoming less common because of their inferior driving characteristics on slippery roads. In the worst case scenario, a drive-wheel spin results in a dangerous and difficult-to-control rear-end skid. Advantages of rear-wheel drive cars are that they are usually easier and cheaper to maintain and that they are better suited for heavy trailers.

Four-wheel drive cars are, on the other hand, becoming more common. They have better grip on ice, snow and other difficult terrain. 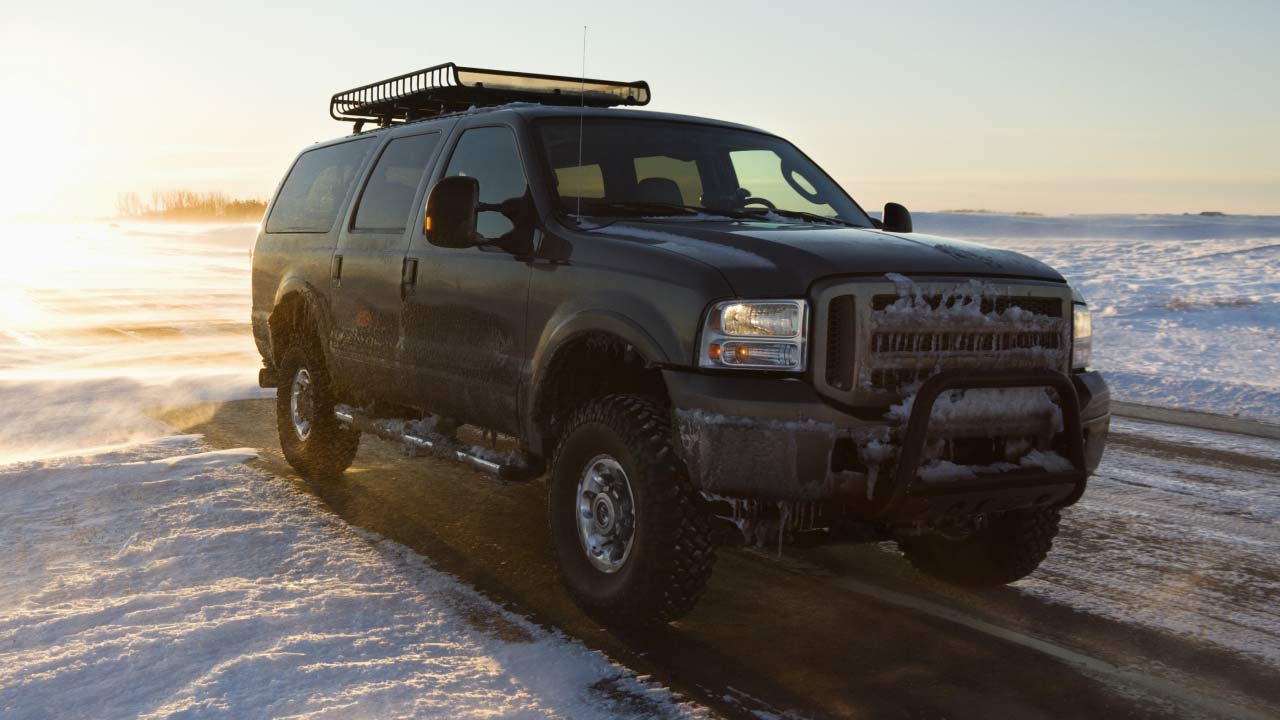 If you drive a lot on ice and snow or other difficult terrain, a car with four-wheel drive might be the best choice

The steering system's task is to transfer the movement of the steering wheel to the wheels so that the car changes direction.

To check if the steering system is worn or loose, you can stand beside the car and turn the steering wheel with the engine turned off. If the system works as it should, the wheels react immediately.

If the steering wheel shakes at a certain speed, the wheels are incorrectly balanced or some part of the steering system is worn.

Power steering is a help system that makes it easier to turn the steering wheel. The system is operated and lubricated using power steering fluid (sometimes called hydraulic fluid). The power steering only works when the engine is running, which means steering becomes more sluggish while being towed. 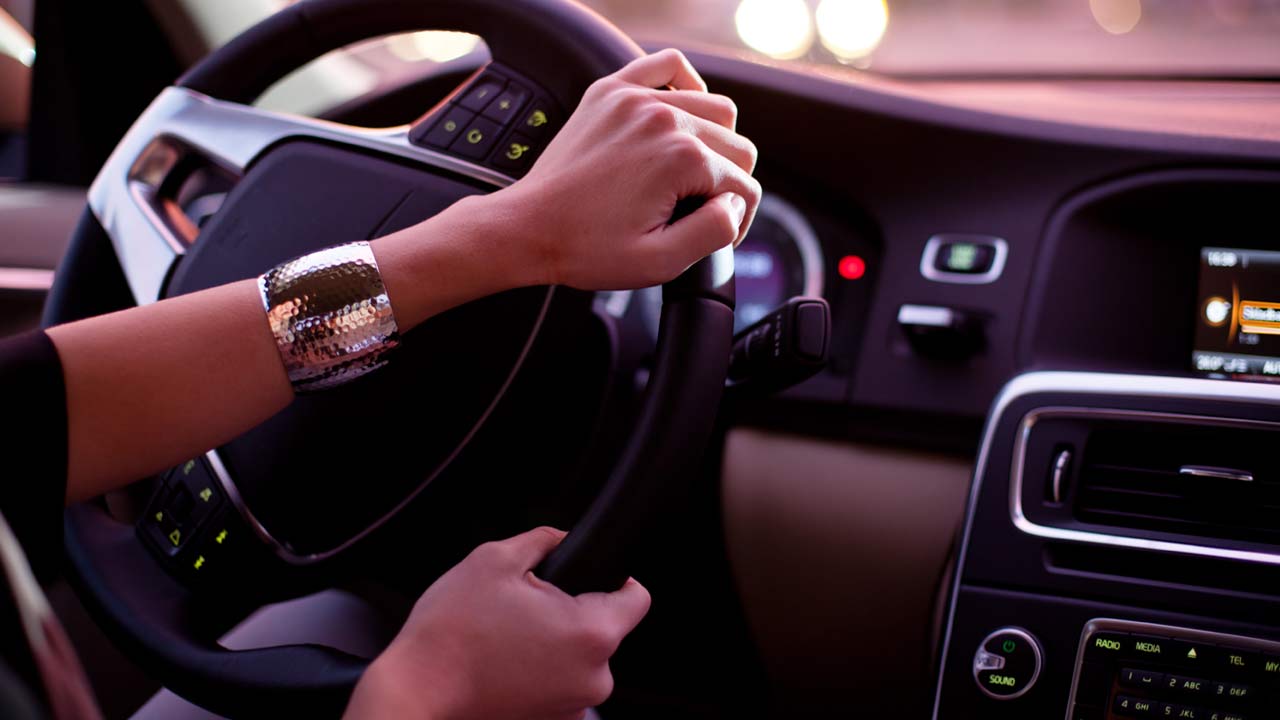 Power steering makes it easier to turn the steering wheel

If you experience "steering wheel jerks" while driving, and if steering alternates between easy and sluggish, dirt or air has probably entered the power steering system.

On some cars, a warning light on the dashboard comes on if something is wrong with the power steering system (for example, if the fluid is leaking.)

If you suspect that the power steering fluid needs to be replenished (for example, if the power steering feels sluggish or makes whining noises) you should let a workshop do it, as it can be difficult to fill it yourself. Incorrect choice of fluid can also cause damage to the system.

Hand position on the steering wheel 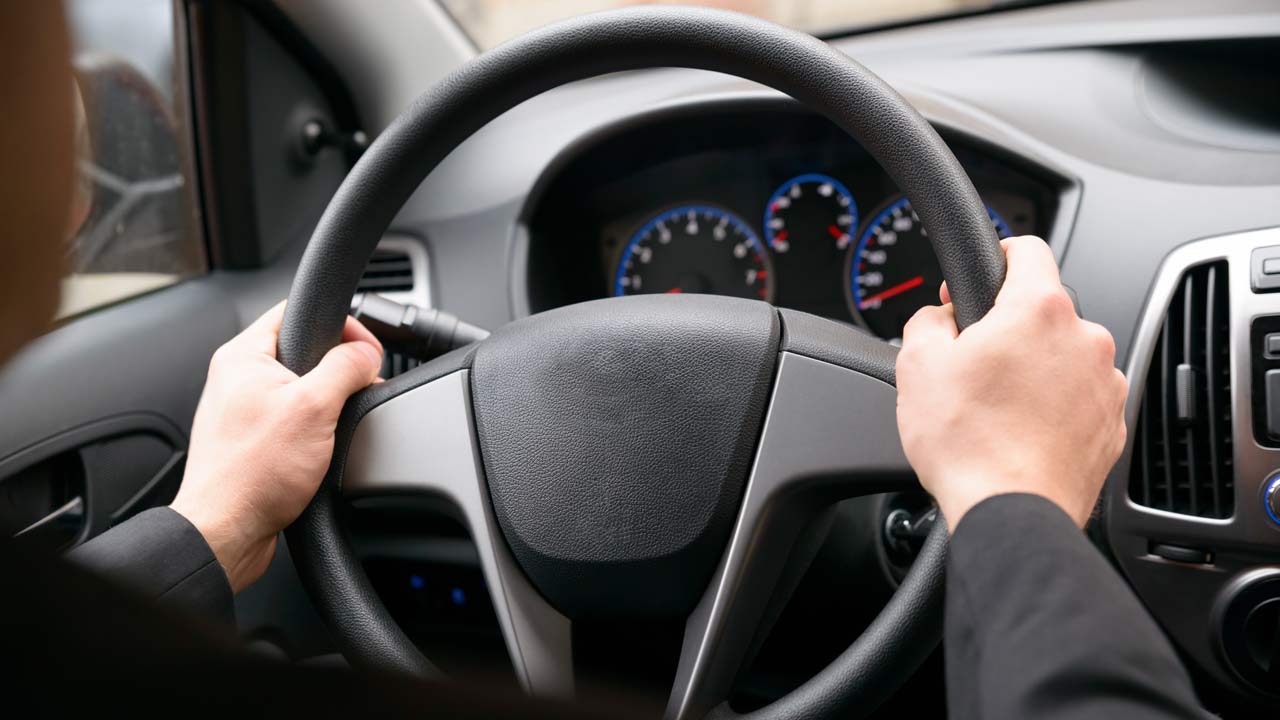 Keep your hands on the steering wheel in the quarter to three position, just like the driver in the picture

In the past, it was said that the correct way to hold the steering wheel was in the ten-to-two position, but that was before cars were equipped with an airbag in the steering wheel. If you hold your hands in that position during a collision, the airbag can knock your hands into your face, causing serious injury.