In order to find out if you are allowed to park in a certain place, you must take both general parking rules and any parking signs into account. 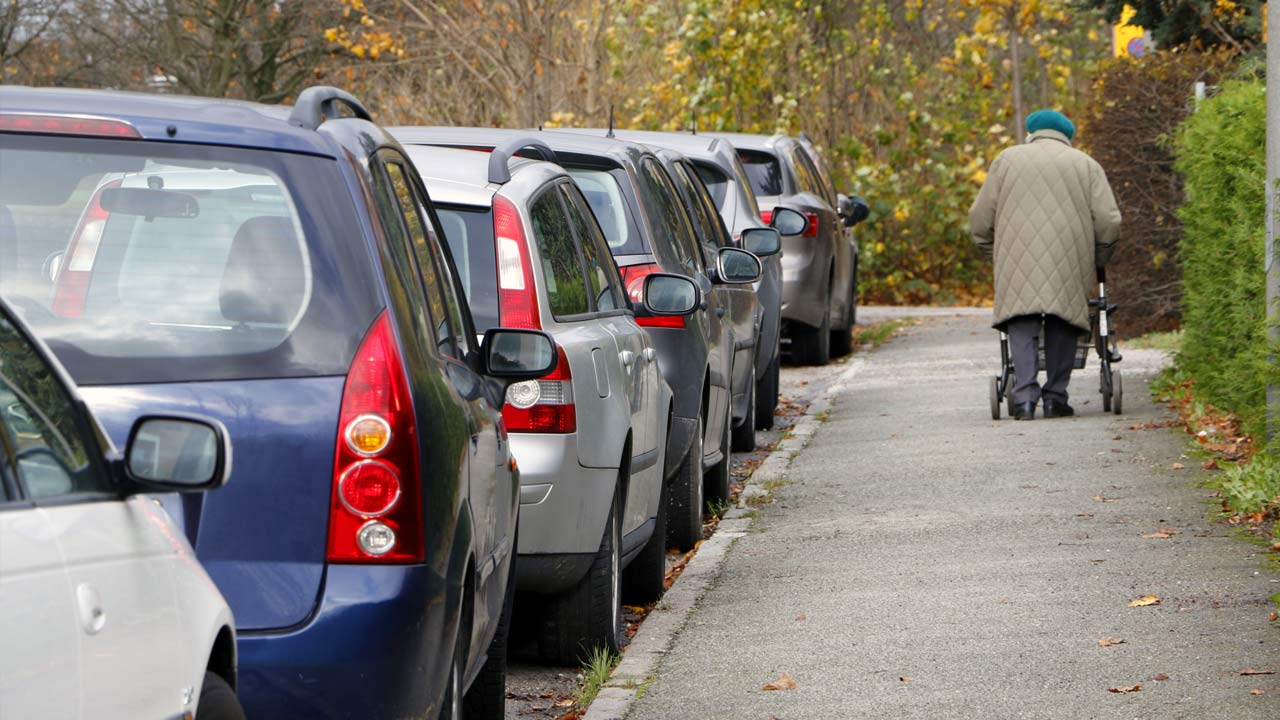 There are many rules regarding parking that you need to know

If you park your car after a parking sign which states that parking is allowed, you have obeyed the local restrictions for stopping and parking. However, if you park the car after the road sign but within five metres of a junction, you have violated the general parking rules, as it is always prohibited to stop or park closer than ten metres before a junction.

All parking rules are based on two simple main principles. You must not stop or park so that you:

When you have parked or stopped on a road with poor visibility or insufficient lighting you must switch on your parking lights, so that other road users are able to see the car.

In the event of an emergency stop in a place where stopping or parking is prohibited, you must also turn on the hazard warning lights. On roads where the speed limit exceeds 50 km/h (in effect this means 60 km/h or higher) you must also place a warning triangle behind the car. 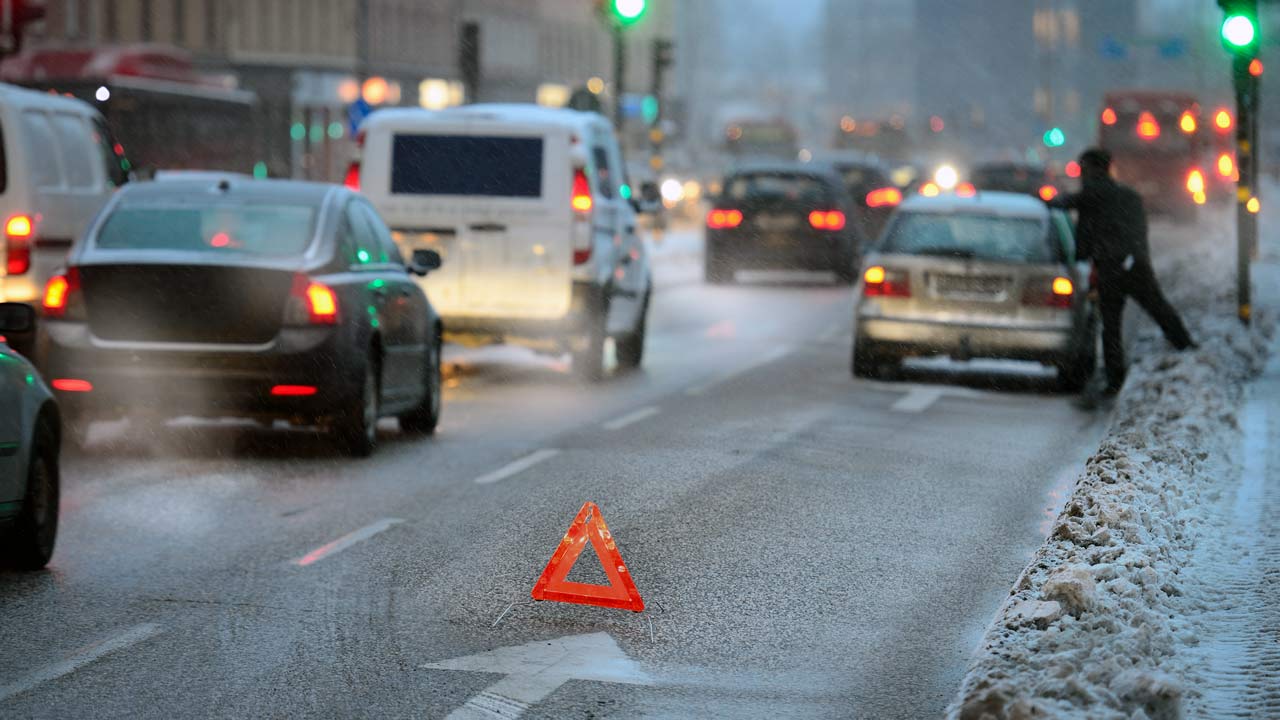 If you are forced to stop, due to an emergency, in a place where stopping or parking is prohibited you must turn on the hazard warning lights

Where parking is prohibited, you must never park and only stop to load or unload goods or to allow a passenger to get in or out of the car. Stopping is also allowed if it is necessary to avoid danger or if traffic conditions so require.

If you stop for any other reason, your car is considered to be parked. It is, for example, not allowed to stop where parking is prohibited to answer your phone or run a quick errand.

In a parking space where only a certain type of vehicle (for example, bus) or a certain group of road users (for example, people with disabilities) may park, other vehicles may not park or stop other than to allow a passenger to get in or out of the vehicle.

It is prohibited to park: 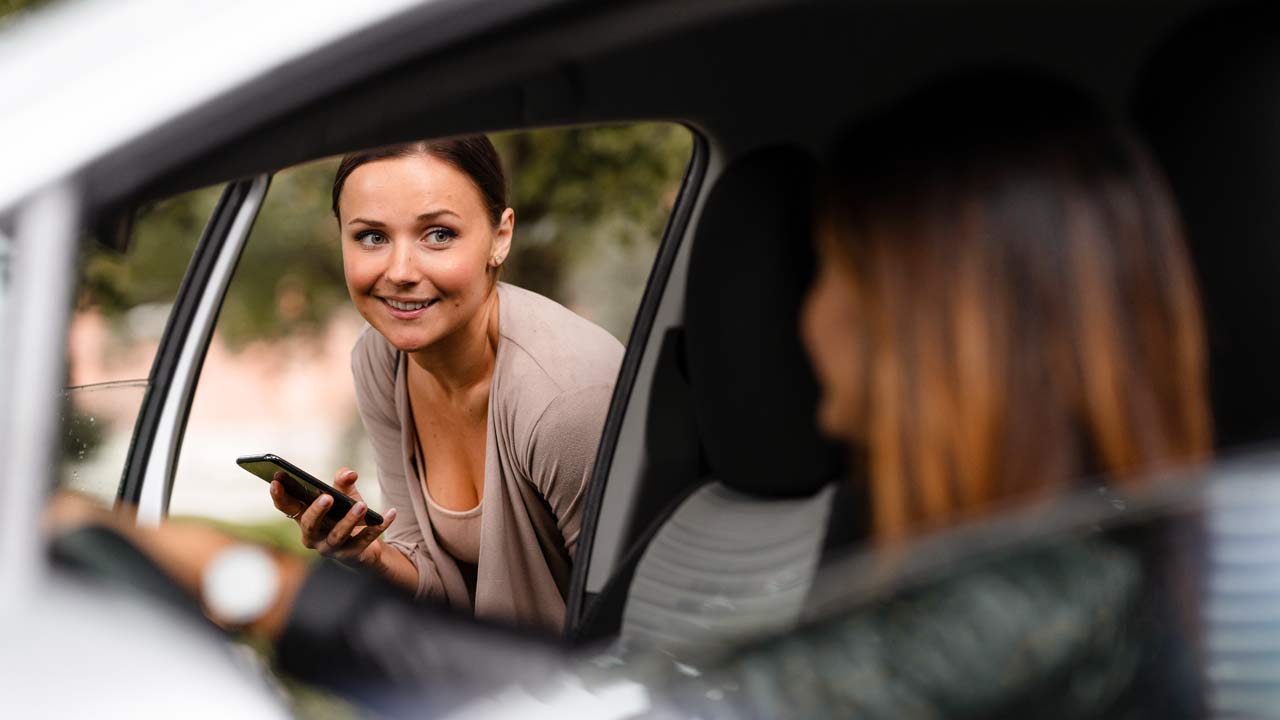 Where parking is prohibited, you are allowed to stop to load or unload goods or to allow a passenger to get in or out of the car

Where stopping is prohibited, you must never stop unless it is necessary to avoid danger or if traffic conditions so require.

It is, for example, allowed to stop where parking and stopping is prohibited if there is a large obstacle on the roadway or if there is a traffic jam.

It is prohibited to stop:

No stopping or parking

You are never allowed to park at bus or tram stops, as parking is prohibited closer than 20 metres before and five metres after the actual stop sign. However, you are usually allowed to stop to allow a passenger to get in or out of the car – but not to load or unload goods – provided that this can be done safely and without you obstructing the traffic for which the stop is intended. 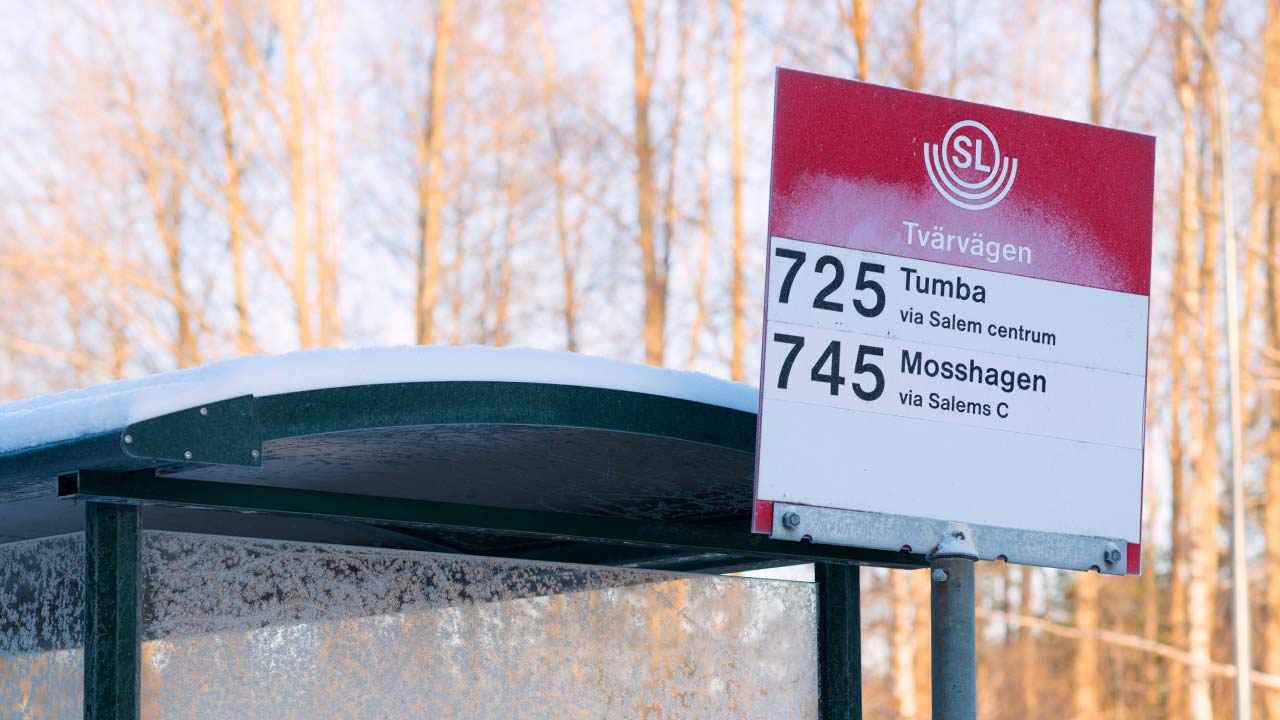 Note that at some bus and tram stops stopping is prohibited altogether. Where this is the case, the stop is marked with a solid yellow line on the kerb, and possibly also a yellow zigzag line on the street. At these stops you are not allowed to either stop to load or unload goods or to allow a passenger to get in or out of the car.

Join today and get access to over 1,400 theory questions, unlimited tests and all of The Licence Game!
Below you can read what our members are saying about iKörkort.nu.

In addition to the general parking rules, there are also local restrictions for stopping and parking. These regulations are adapted to local conditions and are usually indicated by road signs.

An additional panel with time indications always supplements another road sign and indicates which days and between which times the indication on the road sign applies. They can, for example, tell you when a road sign with a speed limit or a parking prohibition applies.

If the time indication extends over midnight, the time period after midnight applies the following day.

If a certain date or weekday is indicated, the regulation applies on that day regardless of whether the day is a weekday, weekend day or holiday.

Special rules for stopping and parking

Parking allowed except 8-18 when parking is prohibited

In densely built-up areas special parking rules called alternate side parking (also known as date-zone parking) often applies. When these rules are in effect all cars must be parked on the same side of the street. The date determines which side you are allowed to park on.

The rules are designed to facilitate snow clearing, street cleaning and sanding, which usually takes place at night.

An additional panel may limit the parking prohibition to certain times, for example from 0:00 until 06:00. When this is the case, it is allowed to park on both sides of the road during the rest of the day.

If the alternate side parking is not limited to a certain time you must remember to move your car before midnight so as not to risk a parking fine. Keep in mind that an odd number date is sometimes followed by another odd number date, such as March 31 which is followed by April 1. 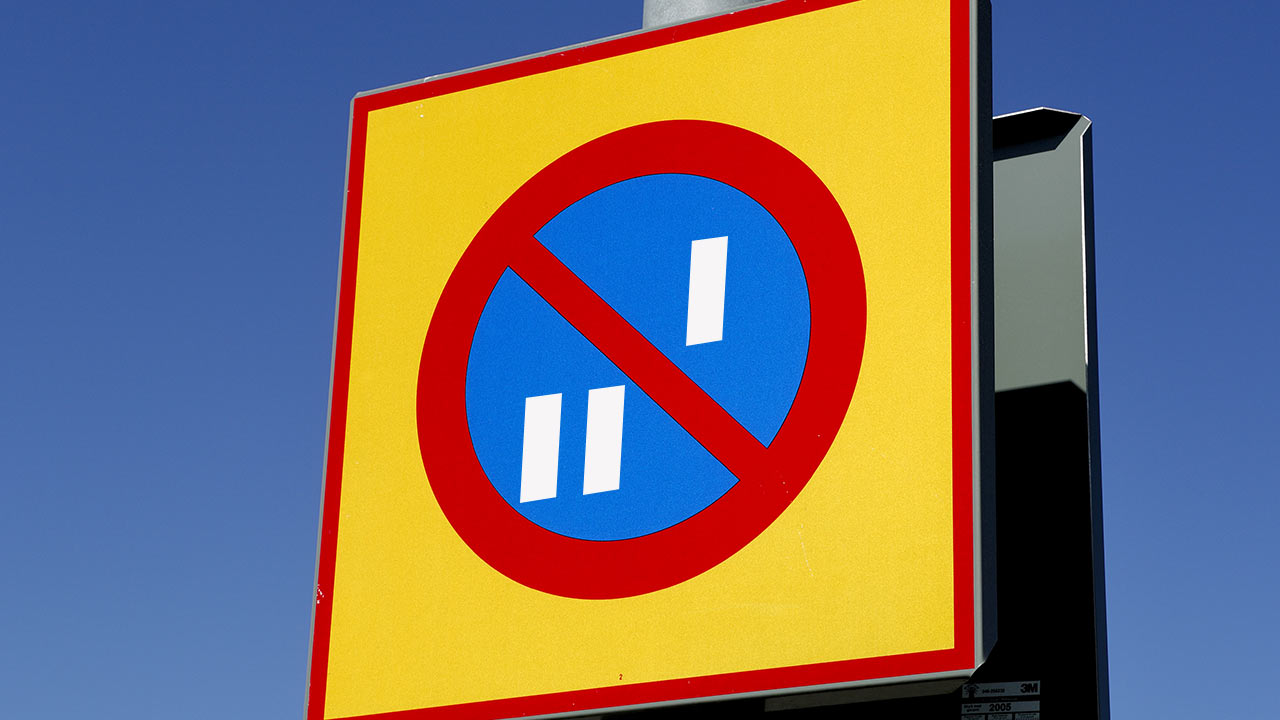 How to park uphill and downhill is not regulated by the law, but you should know how to do it properly to minimise the risks. If you don't take the proper precautions and your car's parking brake fails, your car could roll downhill and hurt other road users.

After you have parked your car downhill you should turn the wheels to the right, engage the parking brake and leave the gear stick in reverse (position P if your car has an automatic transmission).

If the brakes fail the car will roll forwards to the right and either hit the kerb and stop or, if there is no kerb, roll onto the hard shoulder – instead of rolling into the road.

Parking uphill without a kerb

After you have parked your car uphill on a road without a kerb you should turn the wheels to the right, engage the parking brake and leave the gear stick in first gear (position P if your car has an automatic transmission).

If the brakes fail the car will roll backwards to the right and roll onto the hard shoulder – instead of rolling into the road.

Parking uphill with a kerb

After you have parked your car uphill on a road with a kerb you should turn the wheels to the left, engage the parking brake and leave the gear stick in first gear (position P if your car has an automatic transmission).

To consider when parking

– You may only park in parking spaces for people with disabilities if you have a special parking card. All others may only stop in such a parking space to allow a passenger to get in or out of the car.

– When you have stopped or parked you must ensure that the vehicle cannot begin to roll.

– When you have parked and are about to get out you may not open the doors in such a way that there is danger for others.

– When you have parked you must ensure that no one else can use your vehicle accidentally. Do not leave the car unlocked without supervision. It is prohibited to leave the key in the ignition in an unsupervised vehicle.

– Never leave a child alone in the car. Do not leave pets in the car when the car is parked in the sun as it can quickly become very hot inside.

– When reversing out of a parking space you must always give way to all other road users. In case of an accident it is, generally speaking, the fault of the one reversing. 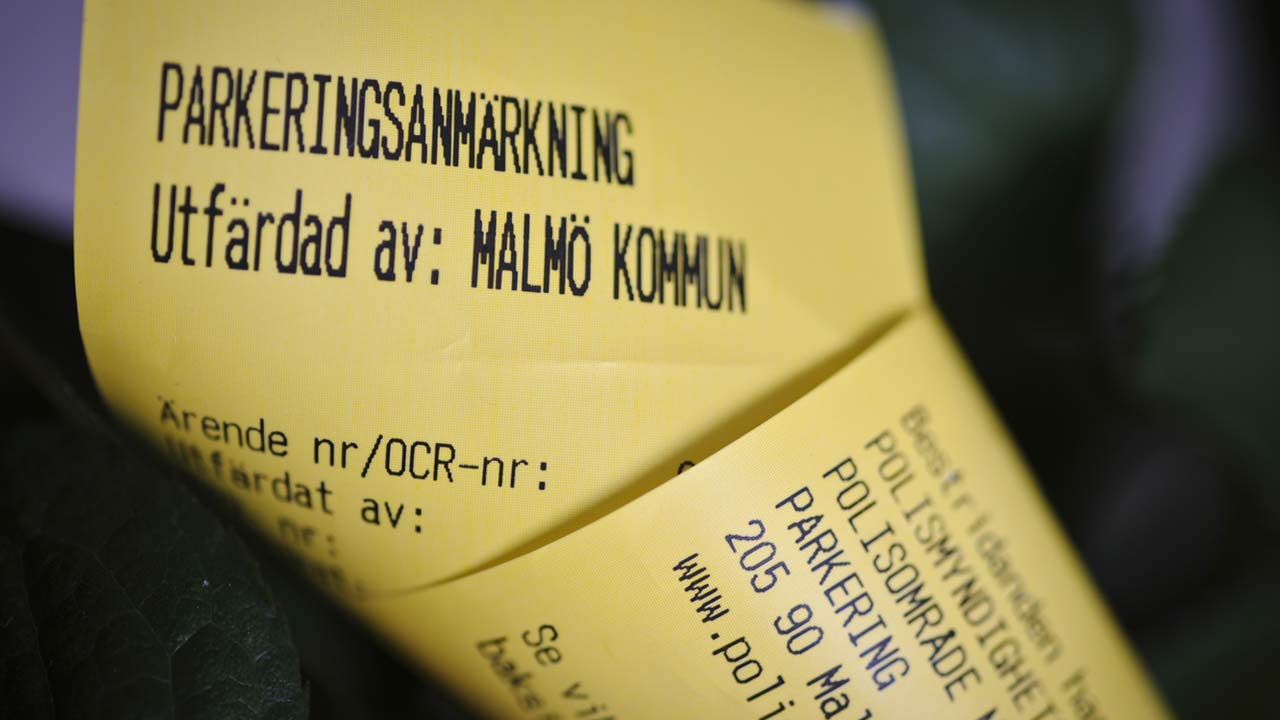 Parking your car in the wrong place, not paying parking fees or forgetting the parking disc can be expensive mistakes

Mopeds class 2 may be parked in the same manner as a cycle.

Mopeds class 1 must be parked according to the same rules as a car. However, class 1 mopeds may also be parked in parking spaces reserved for motorcycles.