Overtaking and meetings on country roads

Overtaking can be associated with increased risks, especially at the high speeds that are common on country roads. Always avoid unnecessary, impulsive or opportunist overtakes – overtaking requires planning and forethought – and keep the basic rule for overtaking in the back of your head: 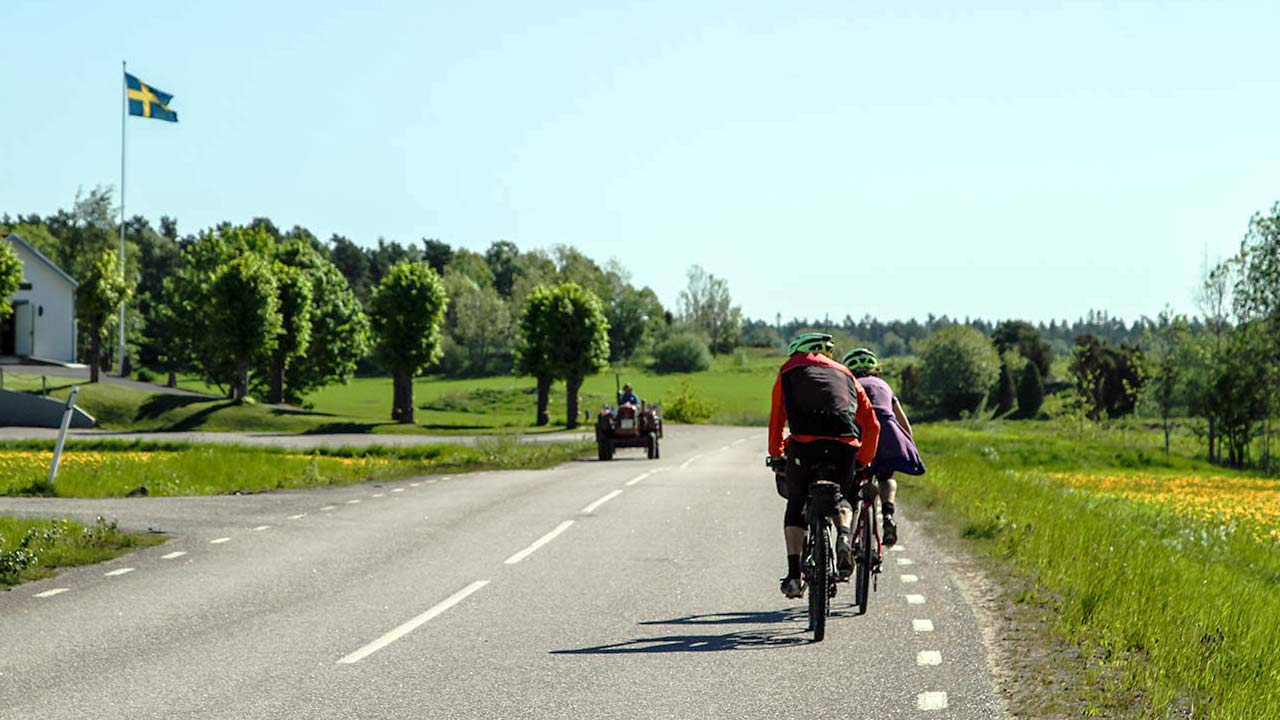 Ask yourself the following before overtaking:

If you have any doubts about the overtaking manoeuvre you must refrain from overtaking and wait for a safer opportunity.

Before overtaking a heavy truck, or other large vehicle, you need to keep in mind that: 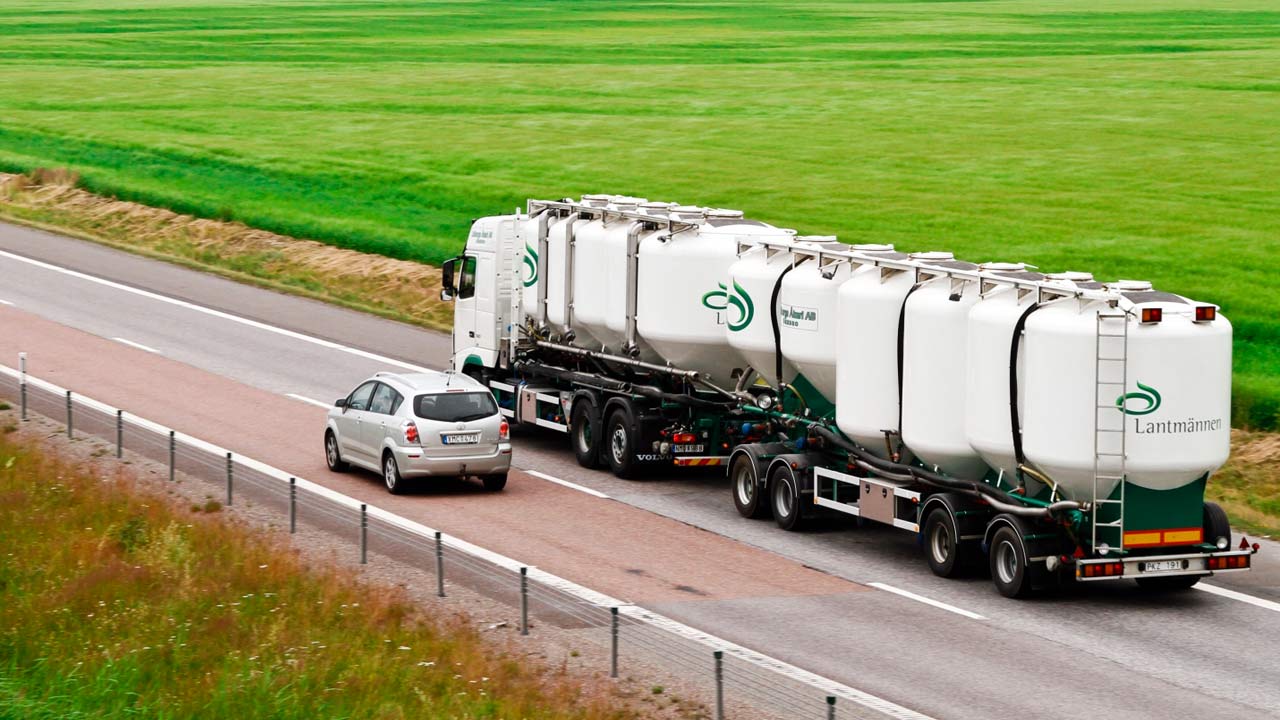 Overtaking a truck can take longer than you first thought, especially on downhill slopes

Such signs mean that the vehicle or vehicle combination is large and long, which is something that you have to take into account if you are going to overtake it.

It is always prohibited to overtake:

* Exception: Overtaking at low speed is allowed at an unsupervised pedestrian crossing, cycle passage or cycle crossing if there is more than one lane in your direction and one of the following requirements is met:

Passing on the right side

On roads where there are at least two marked lanes in the same direction and the speed limit is 70 km/h or lower you are allowed to pass vehicles on the right side.

It is also allowed to pass vehicles on the right side: 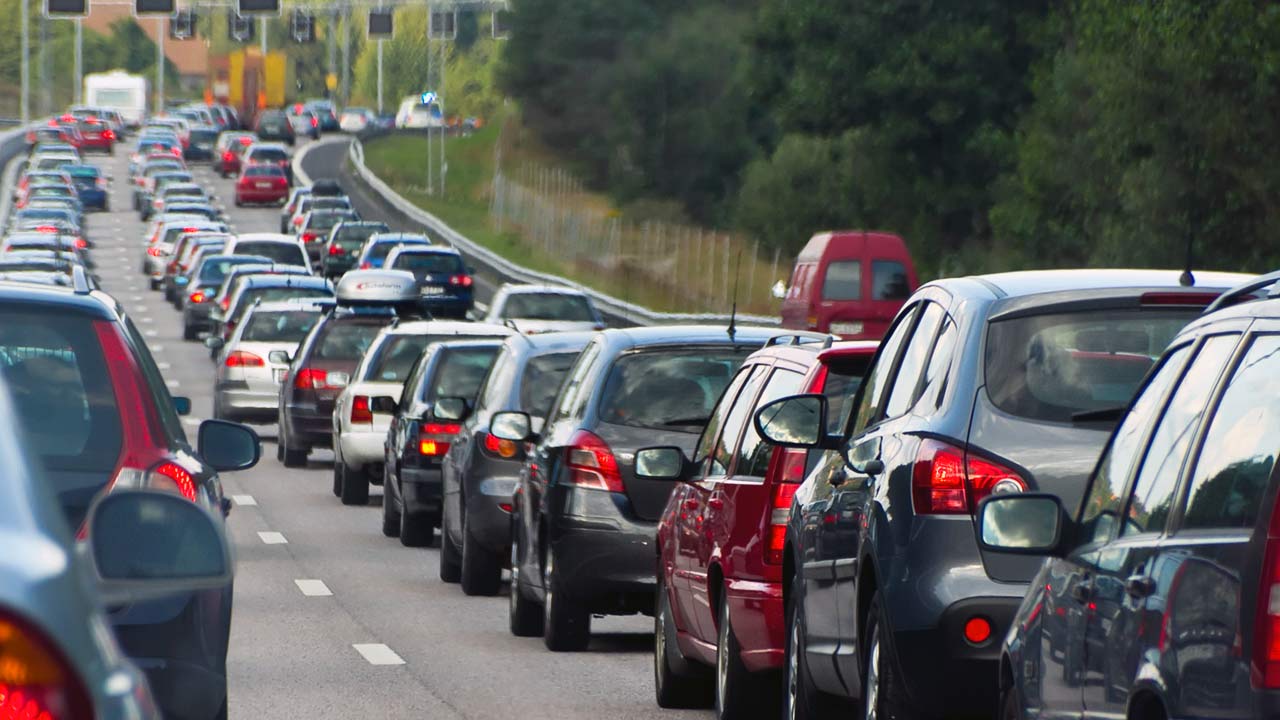 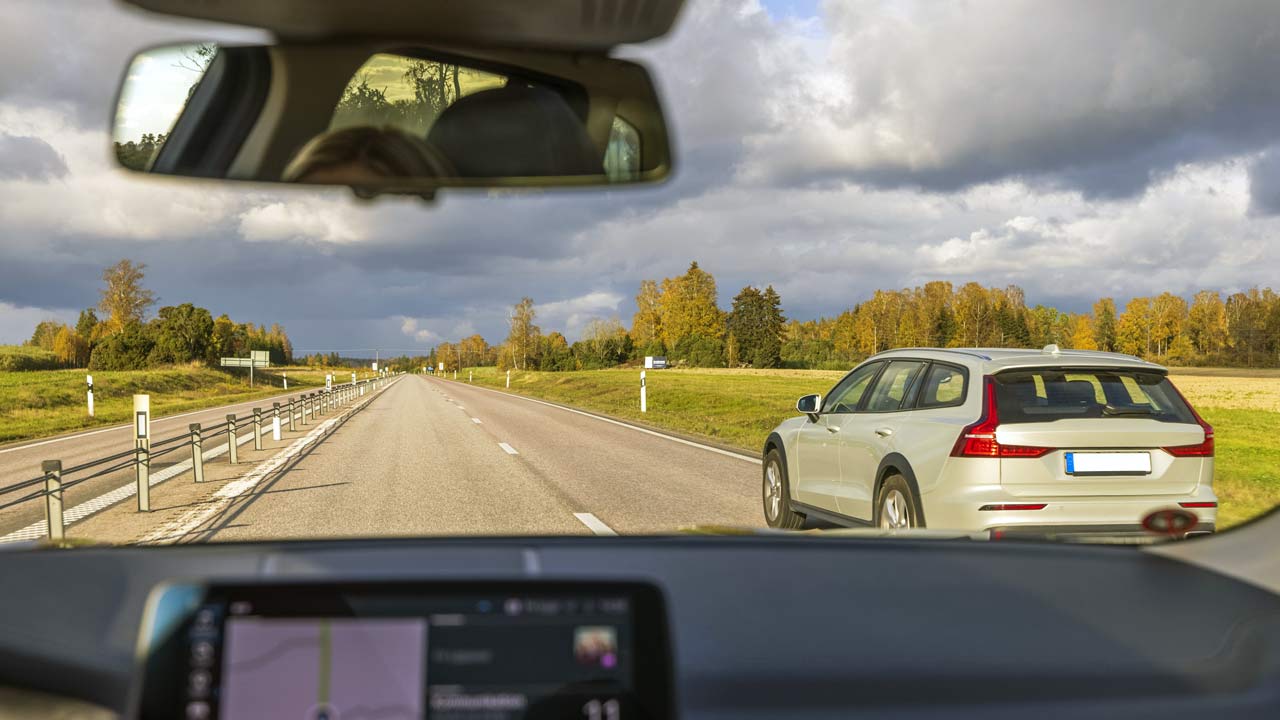 From an environmental point of view, flying overtakes are also better than accelerating ones, as they do not require as much throttle.

Regardless of overtaking technique, you must leave plenty of sideways clearance between your vehicle and the vehicle you are overtaking. You must not exceed the speed limit when overtaking. 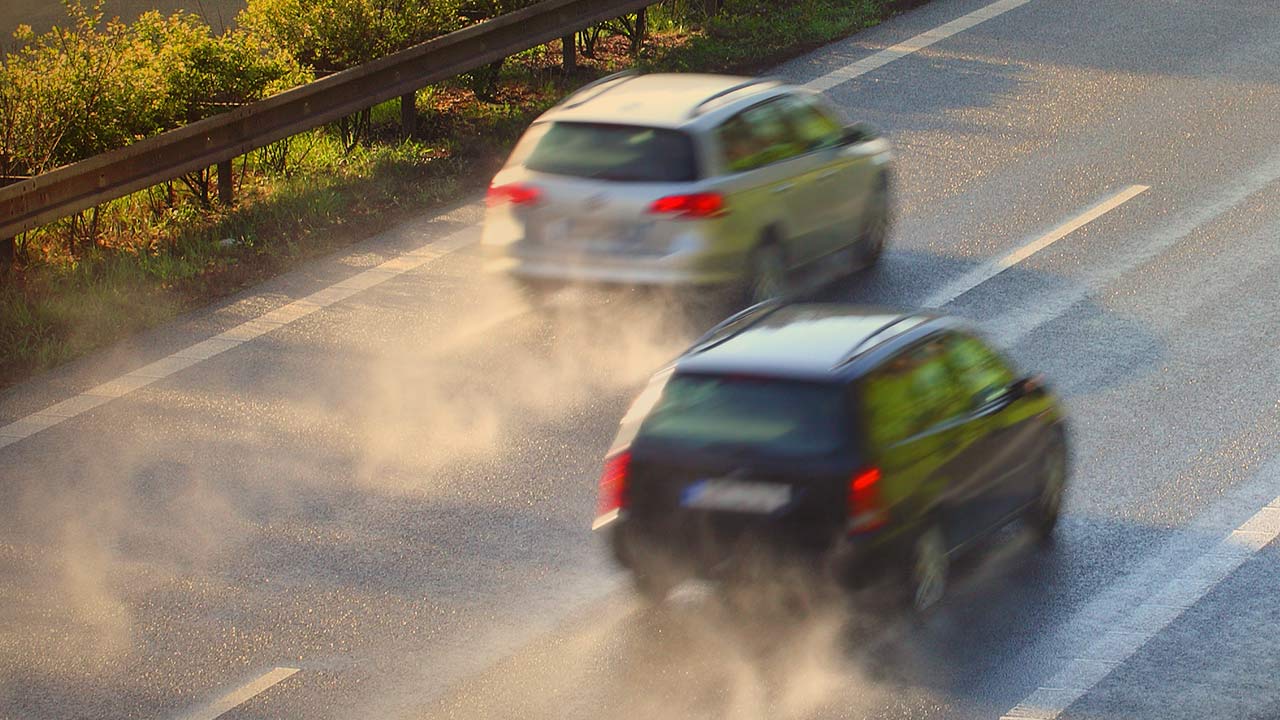 After an overtaking, you should return to the right lane, but preferably not too soon

If you initiate an overtaking manoeuvre that turns out to be dangerous or prohibited to complete, you must abort the manoeuvre in time.

You can never count on the driver of the vehicle you are overtaking to slow down and keep to the right in such a manner that you can easily to return to your lane whenever you like.

If you abort an overtake too late the driver of the vehicle you are overtaking might brake at the same time as you, unintentionally preventing you from returning safely to your lane. 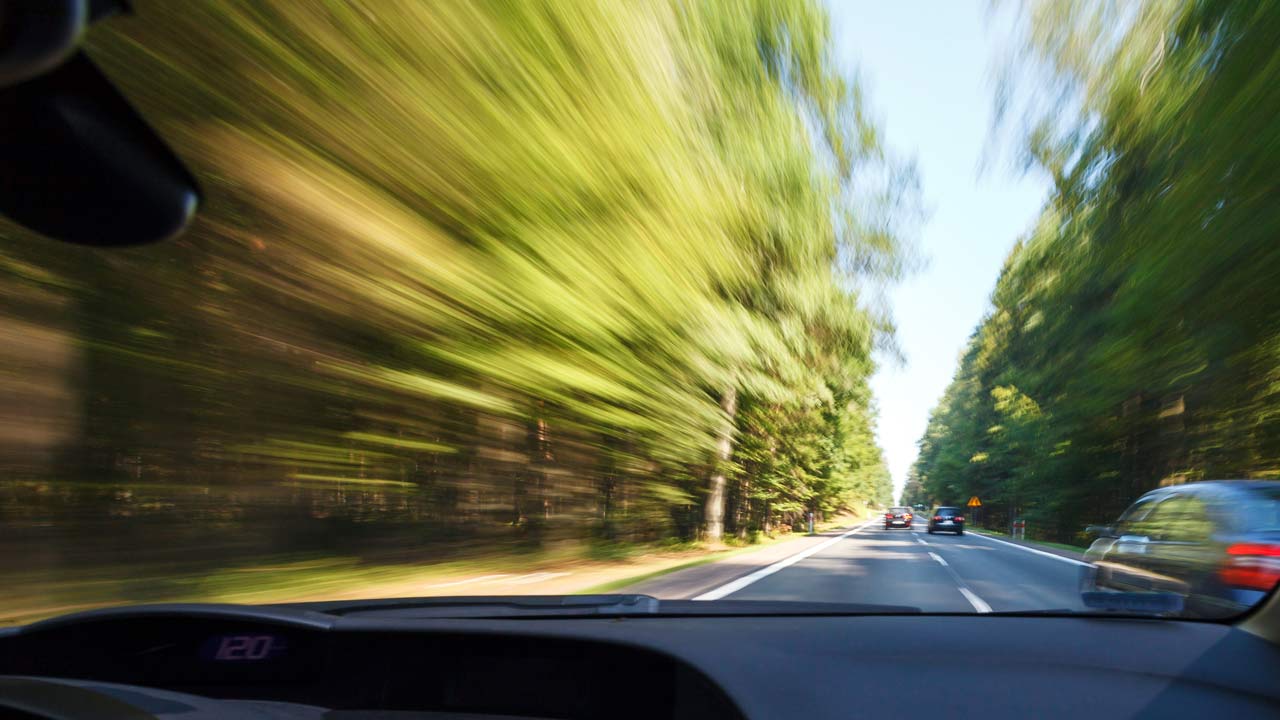 A common misjudgement drivers make is to overestimate the amount of time they have to complete an overtake. Meetings with oncoming vehicles usually come much earlier than we think they will.

You can never count on the driver of an oncoming vehicle to register that you are overtaking, or that he or she is able to drive out onto the hard shoulder to let you pass.

When overtaking cyclists and road maintenance vehicles, you need to maintain an appropriate speed and leave plenty of sideways clearance.

All cyclists – but especially elderly people and children on bicycles – may wobble or suddenly pull out to avoid something on the road. The risk of cyclists, moped and motorcycle riders wobbling increases when it is windy. 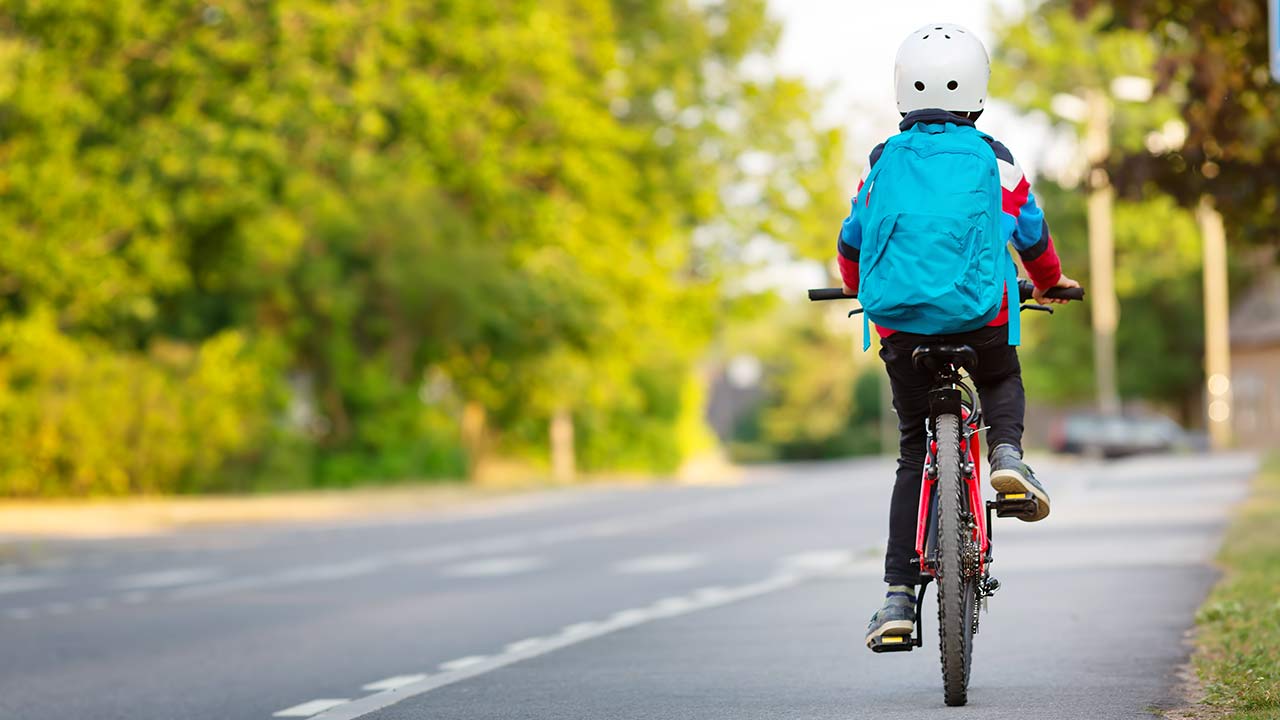 You may overtake road maintenance vehicles on whichever side is most suitable. In other words, you are allowed to pass on both the left and right side.

Keep in mind that operators of road maintenance vehicles are very vulnerable as they cannot keep a constant watch on traffic. The same is obviously also true for road workers.

When overtaking a tractor, you must be aware of the fact that tractors can turn off the road – both to the right and left – almost anywhere. The tractor operator might be heading out onto a field or into a forest.

You must also assume that an operator driving a tractor with a loaded trailer has very poor rear visibility.

Just as with heavy trucks, there is also a risk that tractors increase their speed going downhill and that the tractor operator may not be able to keep to the right – or in the worst case, is forced to veer left – due to an obstacle further down the road, which you cannot see. 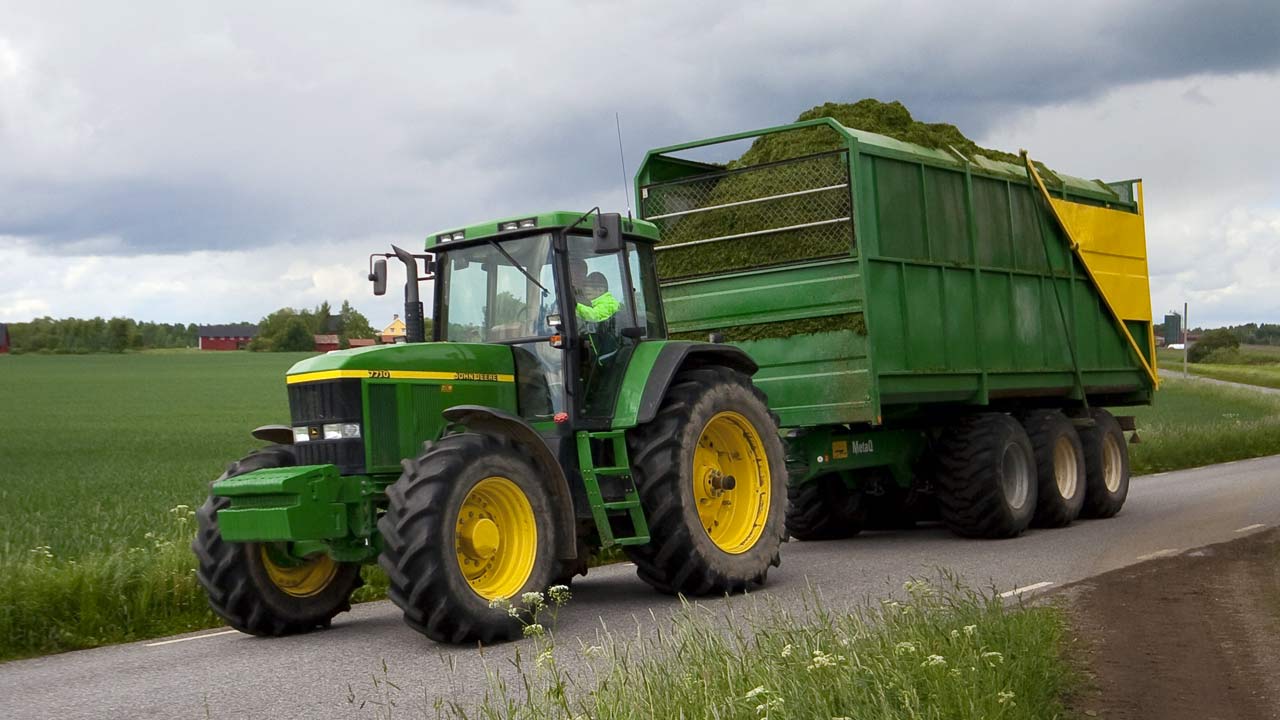 When overtaking a tractor with a trailer you have to assume that the operator's rear visibility is poor, and that you cannot really see what is happening in front of the tractor

When being overtaken, you must do everything you can to make it easier for the overtaking driver. You do this by keeping to the right and maintaining or reducing your speed.

If there is a hard shoulder, it may be advisable to use it while being overtaken. However, you are not obligated to drive out onto the hard shoulder, as long as it is not required to make way for an emergency vehicle.

If the road is narrow, crooked or has a lot of oncoming traffic and you are driving a large vehicle, or are driving slowly, it is especially important that you reduce your speed and keep well to the right. 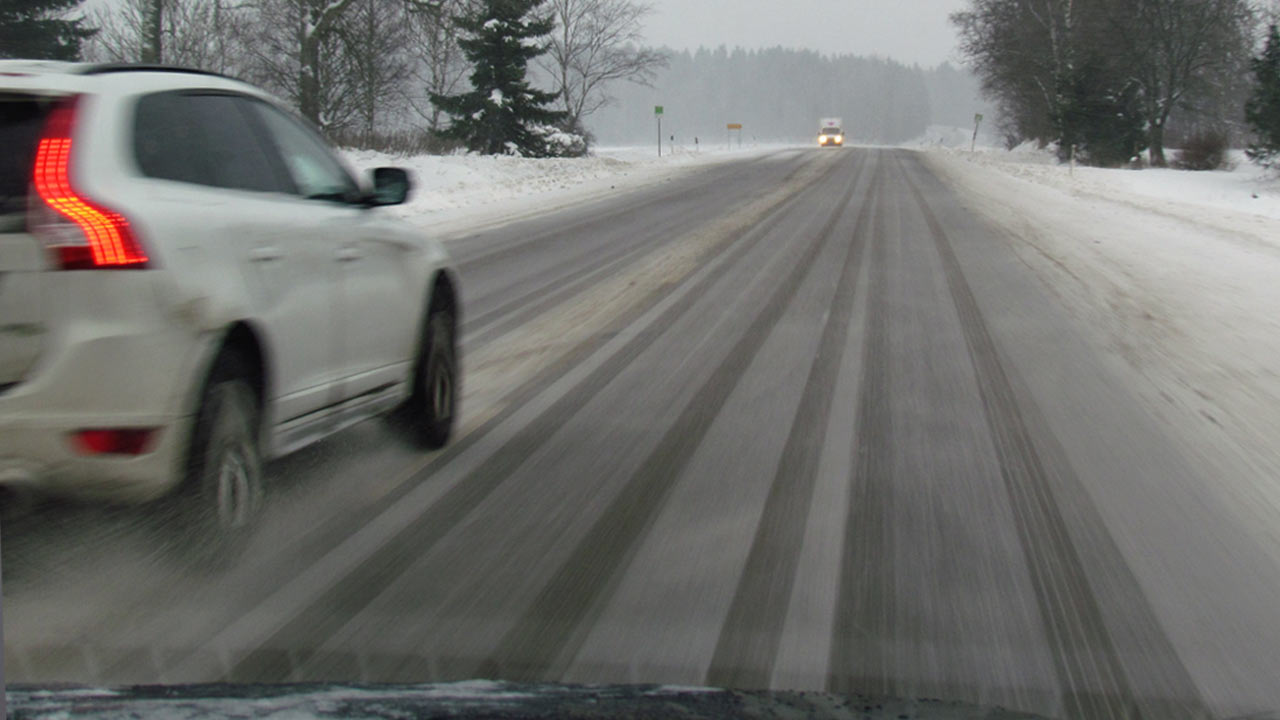 Do not fix your eyes on the vehicle that is overtaking you, as this might cause you to start driving diagonally or miss important things on the road ahead of you. Instead, look far ahead of the car.

Usually, there is plenty of space on country roads, which makes meetings very simple. Just keep to the right to create sufficient sideways clearance. But in cases where the road is narrow, meetings can be more complicated and risky. When this is the case it is especially important to keep to the right and adapt your speed to the situation. 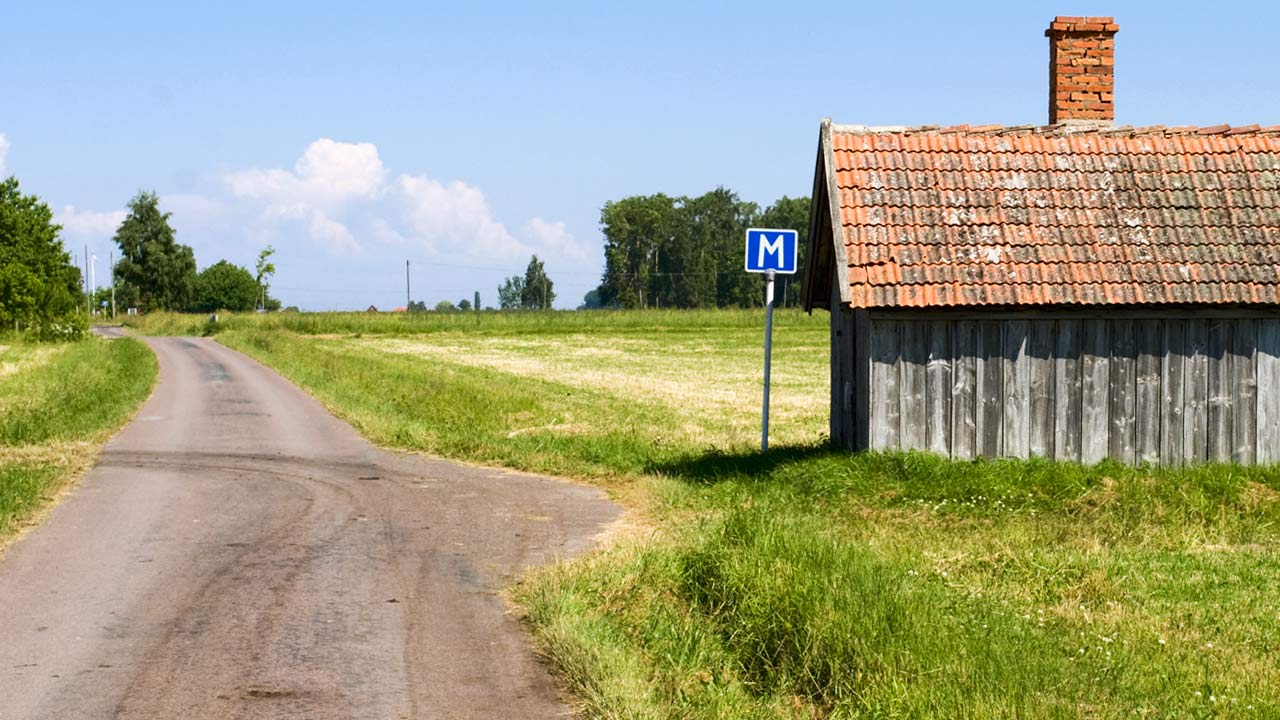 If there is a passing place on the road, you should use it when meeting oncoming traffic

If the road is narrow or if the view is obscured – for example, before sharp turns, curves and hilltops – you must position your car in such a way, and maintain such a speed, that you can handle a sudden meeting with both another vehicle and a pedestrian walking on the side of the road.

In darkness or when visibility is reduced or obscured it is very hard to detect obstacles and unprotected road users along the side of the road. For this reason, you must not keep too far to the right when meeting oncoming vehicles if you do not have a clear view of the road ahead. 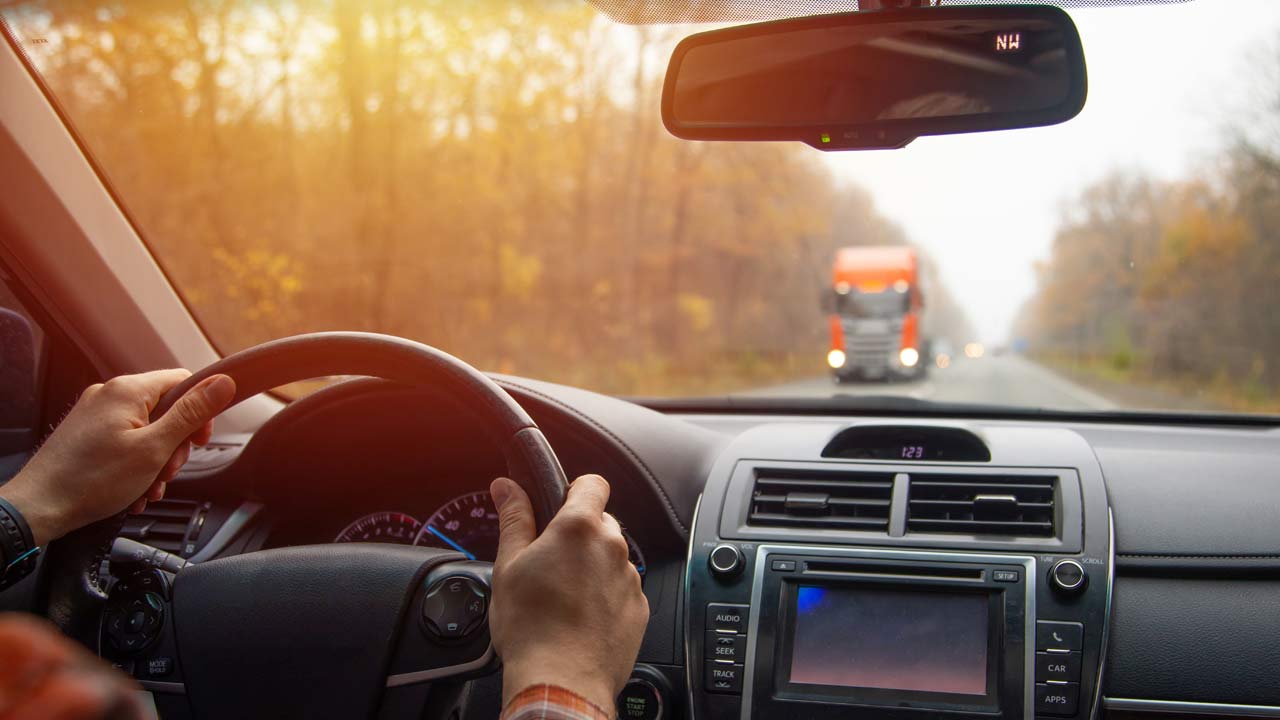 Adapt your speed when meeting oncoming vehicles on narrow roads

An important rule to remember is that it if an obstacle on or next to the road makes it difficult, dangerous or impossible to proceed at the same time as another vehicle, and nothing else regulates the duty to give way, it is the driver with the obstacle on his or her side of the road that should stop and give way.

Keep in mind that pedestrians should walk on the left side (their left) of the road. This means that you must expect to meet pedestrians when driving on country roads. If a pedestrian, walking on your side of the road, makes it dangerous to proceed on a narrow road at the same time as another vehicle, you must stop and let the oncoming vehicle pass.

What is the difference between moped class 1 and moped class 2?How do you calculate the braking distance?Approximately how many metres per second do you travel when driving at 70 km/h?What is the stopping distance if you are driving at 30 km/h?How fast are you allowed to drive a car with a coupled trailer with brakes?What applies in a junction with both a traffic light and a stop sign, if the light is green?What is the maximum speed limit for a heavy truck, without a trailer, on motorways and clearways?What is a flying overtake?What does flashing white lights at a level crossing mean?What distance should you keep to the vehicle in front of you if you are driving at 90 km/h?