The brain and our senses - driver's licence theory | iKörkort.nu

The brain and our senses

You are always aware of your surroundings because the brain is constantly working to analyse and process all the impressions that your senses produce. This is called perception. In order for you to be able to pay attention to the right things, rather than all things, the brain selects the most important impressions. This is called selective perception.

When you are starting out as a driver your brain has not yet learned which impressions are the most important. This means that you sometimes might pay attention to the wrong things, make wrong assessments or make incorrect decisions.

Inexperienced drivers usually have an insufficiently short and narrow field of observation. They also tend to fix their eyes on static objects such as the roadside, the central barrier or parked cars.

Experienced drivers have a longer and broader field of observation. They are also better at paying attention to moving objects without fixing their eyes on an object longer than is necessary. 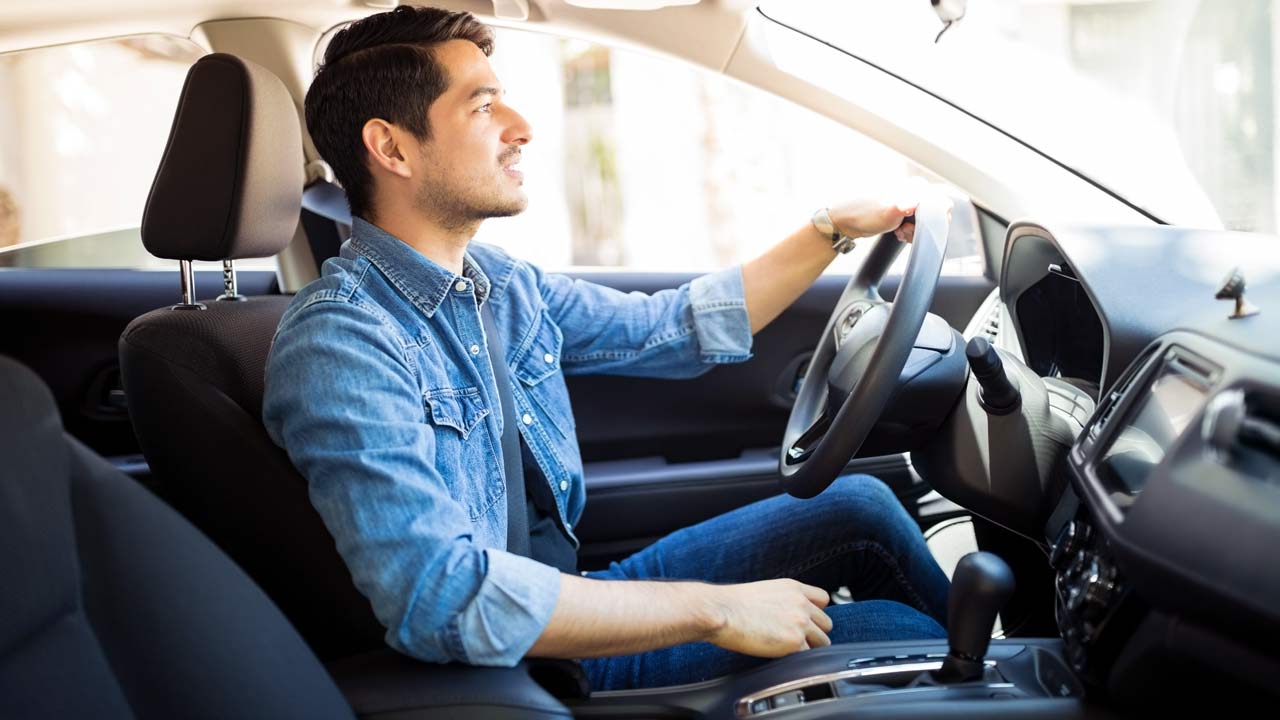 Experienced drivers are able to perceive, sort and prioritise information – both consciously and subconsciously – much faster than new, inexperienced drivers can. It is therefore important that you, when you are starting out as a driver, are active and consciously thinking about moving your eyes and looking far ahead of the car. It is also important that you do not fix your eyes on anything longer than is necessary.

Whether you are a new or an experienced driver, your field of observation becomes narrower at high speeds (this phenomenon is called tunnel vision). For this reason it is especially important that you are active and moving your eyes when driving fast.

It is the brain, not the foot, which determines how long it takes before you apply the brakes when something unexpected happens on the road in front of you. The time it takes is called reaction time and is determined by your reaction ability. The average driver's reaction time is one second.

Many young drivers believe their reaction ability is better than older drivers, perhaps because they are used to being faster and stronger than most. But the ability to react is primarily determined by experience, not speed, which is why experienced drivers are generally quicker to react than young drivers. 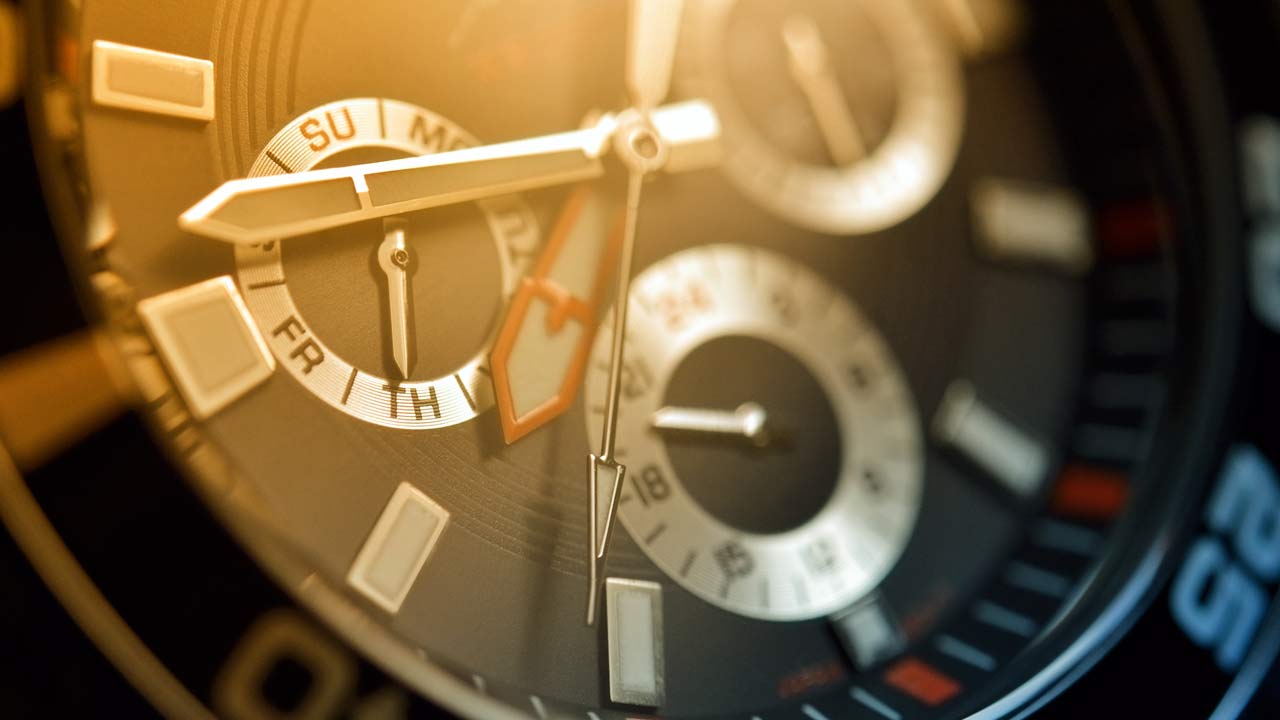 The average driver's reaction time is one second

Readiness for action, a defensive driving style and high risk awareness combined with a lot of experience are crucial for a good reaction ability. This is why experienced drivers aged between 45 and 54 statistically have the best reaction ability.

As the ability to react deteriorates with age, drivers over the age of 75 statistically have the worst reaction ability.

Your brain is constantly working to assess all situations based on your theoretical knowledge and your practical experience. If you have never learned about braking distances or have had to slam the brakes, it is very difficult for your brain to judge where your car will stop if you suddenly have to brake heavily.

Humans can judge distances to a certain extent but are considerably worse at judging speeds. We are poor at determining the speed of oncoming vehicles, but much better at judging the speed of vehicles approaching from the side, for example a car that is driving on a crossing road. 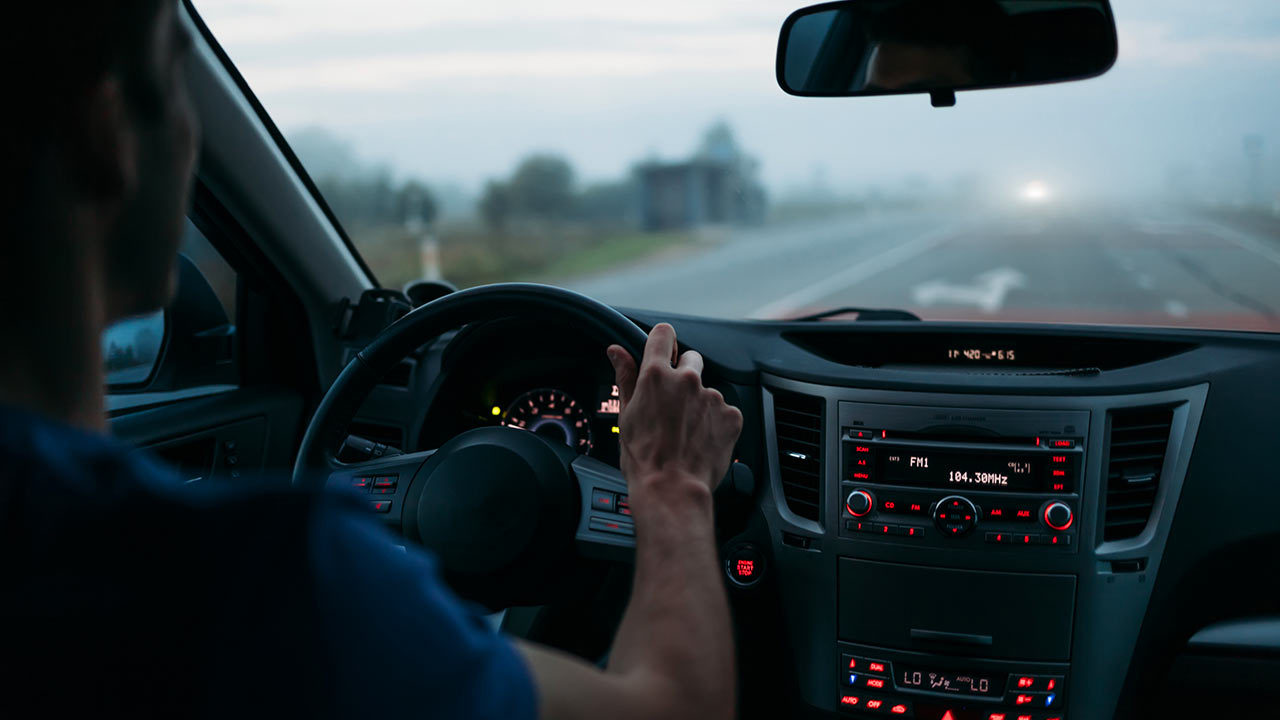 Judging the speed of an oncoming vehicle is very difficult

Meetings with oncoming vehicles usually occur much earlier than we think they will. If you are going to overtake another vehicle or turn left on a country road and misjudge the distance to an oncoming vehicle, or the oncoming vehicle's speed, the consequences can be devastating.

Always expect meetings with oncoming vehicles to come earlier than you think. Do not take chances – if you feel uncertain of where a meeting will take place, it is better to wait with the overtaking manoeuvre or the left turn.

How the brain works

To judge and calculate distances and speeds, the brain uses a variety of clues and details that it interprets and analyses. For example, telephone poles along a road can help the brain estimate the distance to a particular point further away, and how quickly an oncoming car grows in size gives an indication of its speed.

If these clues and details become unclear due to darkness, rain, snow, fog or the like it will be much more difficult for the brain to make accurate assessments. 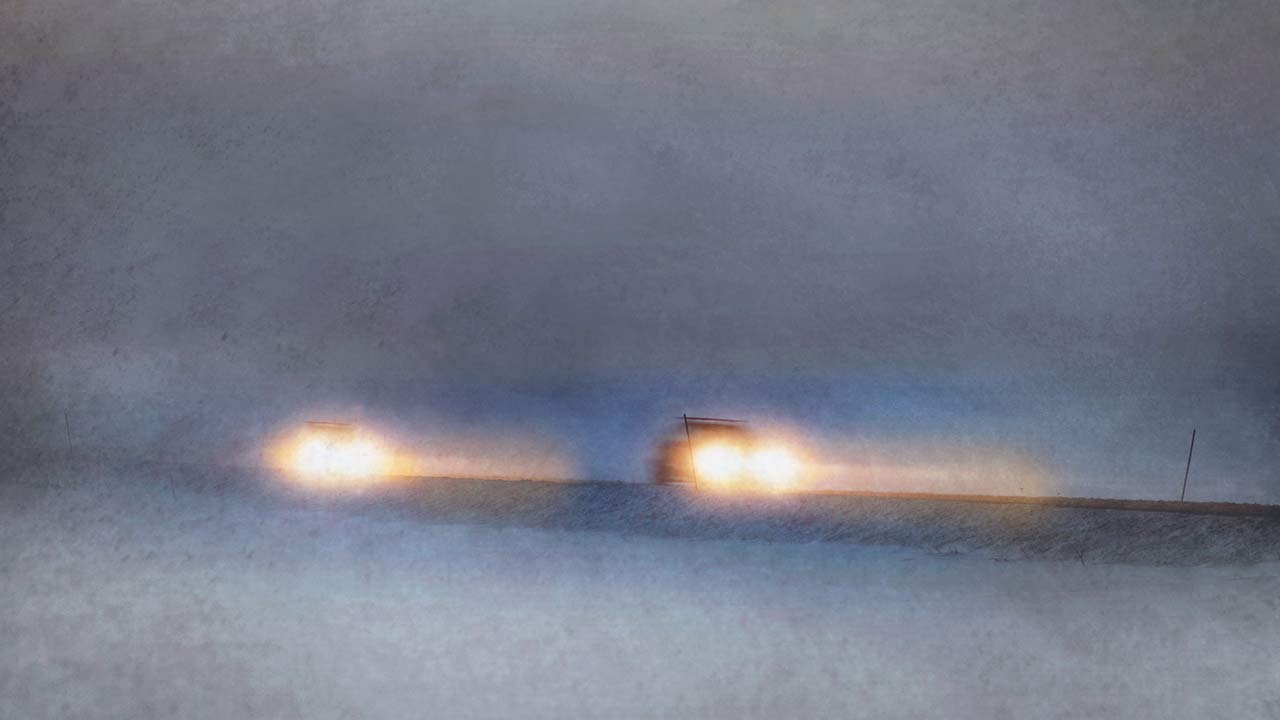 Driving in heavy snow makes it very difficult for your brain to make accurate assessments, especially if you use full beam headlights

Sometimes the brain even interprets certain impressions completely incorrectly, which in the worst case can lead to optical illusions. 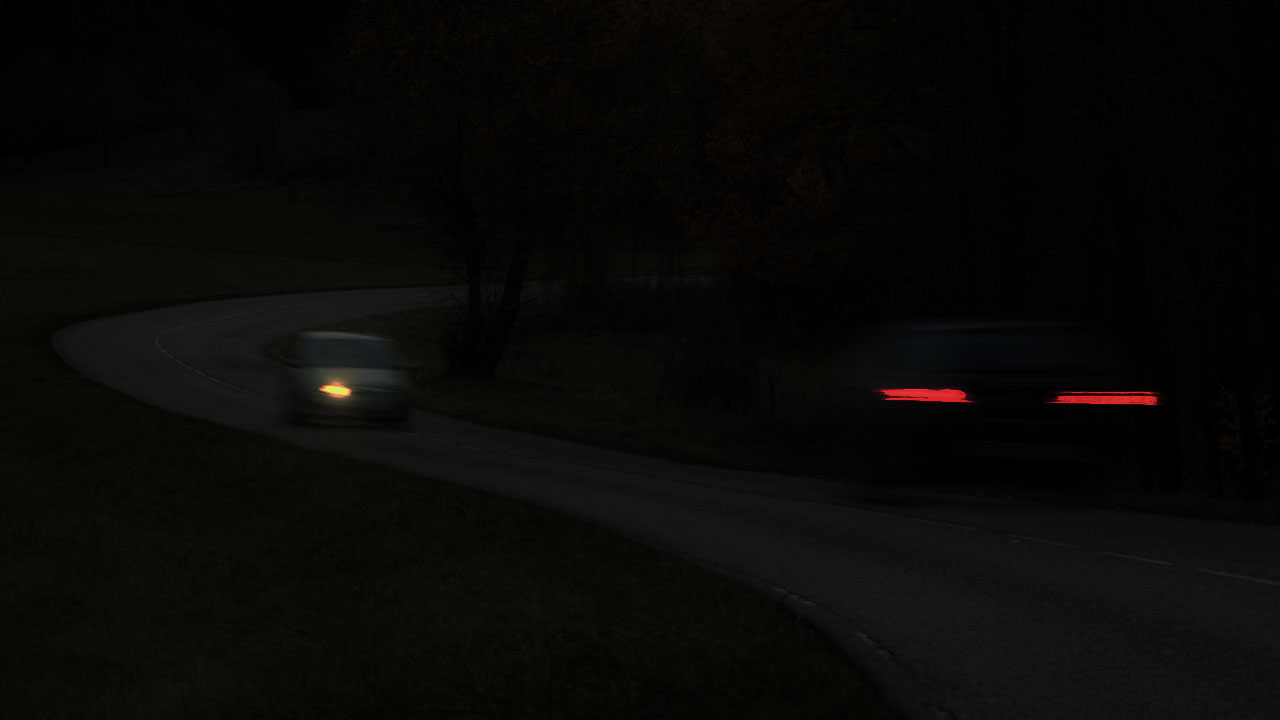 Alcohol, drugs and fatigue make it virtually impossible for the brain to make accurate assessments, which can lead to optical illusions even under normal driving conditions – for example, when driving on a straight road in daylight.

The eyes provide the brain with about 90% of the information you need to be able to drive.

The field of view is normally 180 degrees and consists of two parts: direct vision and peripheral vision.

Direct vision is the 1-2% of the field of view that is used when focusing your eyes on something.

Peripheral vision is the remaining 98-99% of the field of view. Its task is primarily to detect movement. You often perceive something on the edge of your field of view, in the periphery, but must focus your eyes, using direct vision, to truly see and understand what is happening there. 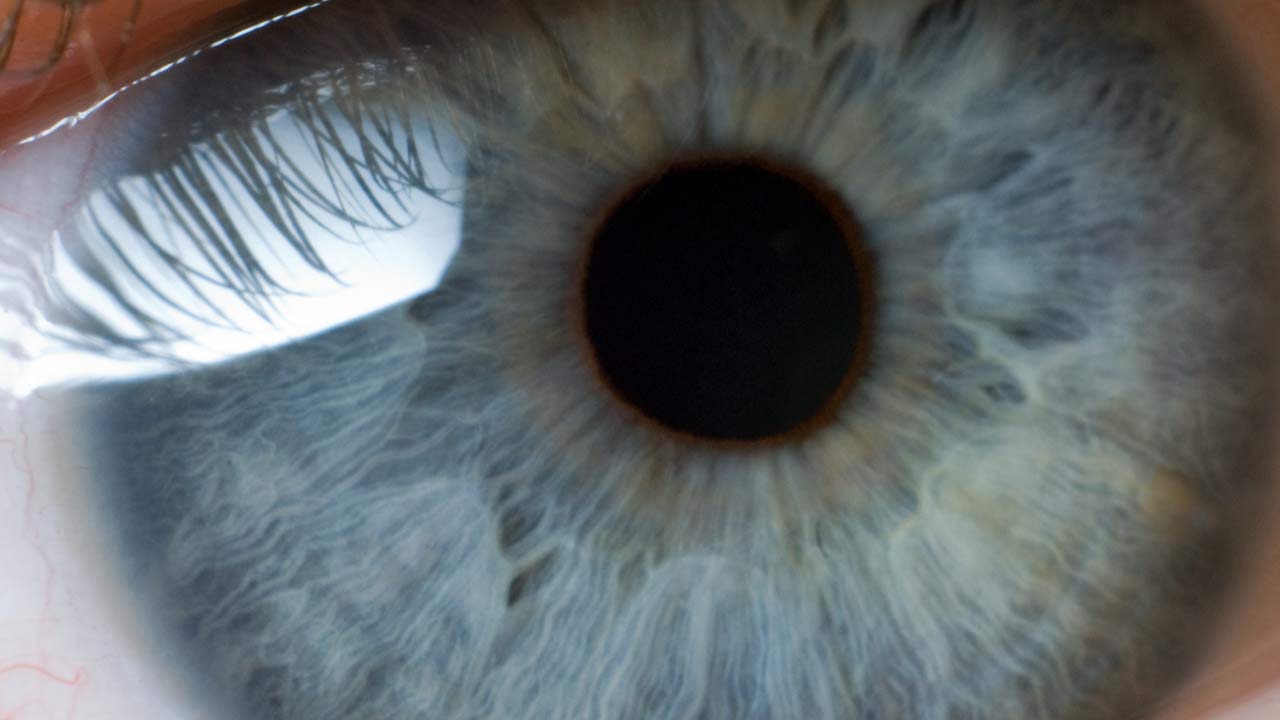 Peripheral vision is impaired by fatigue, stress, alcohol and drugs

To have a class B driving license, you must have a visual acuity of at least 0.5. If you require glasses or contact lenses to reach that level, you must use them when driving. It is important to check your vision periodically, as it deteriorates with age.

There is also a risk of developing an eye disease or visual impairment as a result of another disease. Pay attention to your vision and never drive if you notice your eyesight has suddenly deteriorated.

The effects of visual defects are most noticeable in the dark. 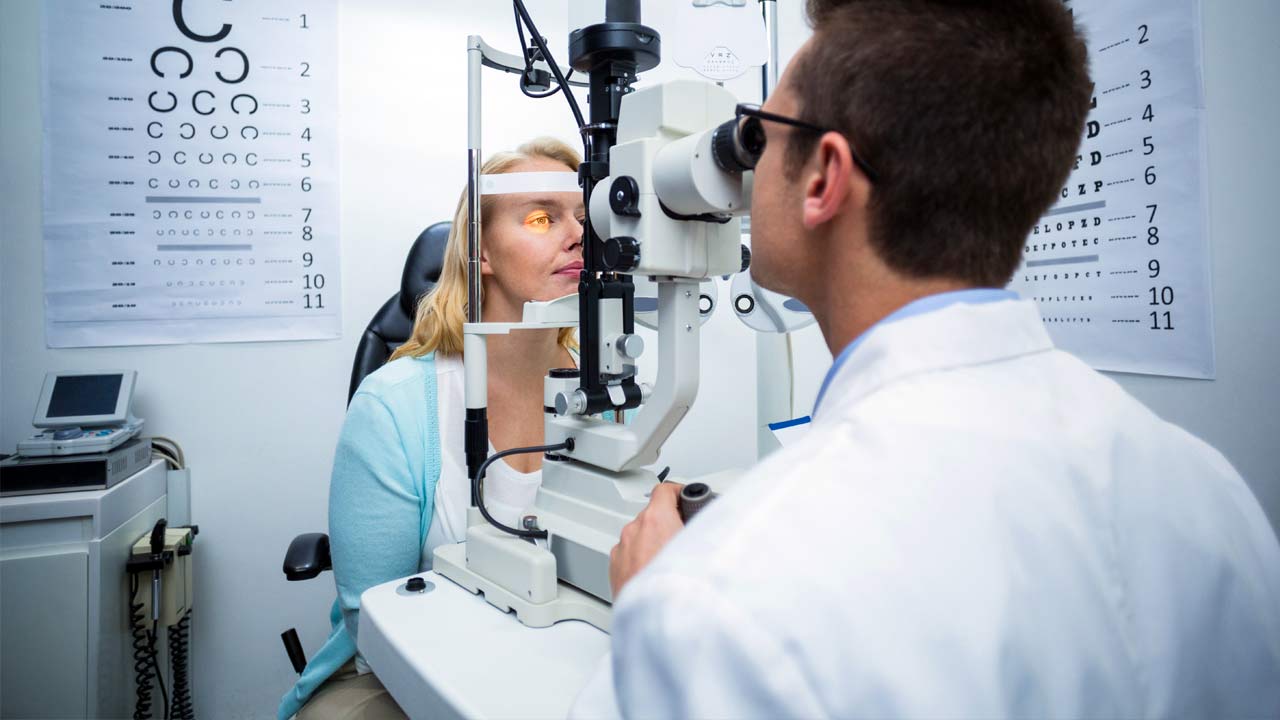 You must have a visual acuity of at least 0.5, using glasses or contact lenses if necessary, for a B driving license

One of the many reasons why mixing alcohol and driving is dangerous is that alcohol impairs your vision. As the blood alcohol level increases, the eyes' ability to cooperate decreases. This, in turn, leads to a reduced ability to assess distances. Glare sensitivity is also increased, and peripheral and night vision is impaired. A person who is heavily intoxicated may start to see double.

In darkness, these negative effects are enhanced.

Even though sight is the most important sense when driving, our other senses are also necessary.

Hearing can make you attentive:

Touch and sense of balance can help you:

Smell can make you attentive: