The first line of protection in a collision is the car's protective body. The front and rear parts of the car consist of so-called crumple zones that are developed to collapse during a collision, so that the sequence of events is slowed down.

Unfortunately, the sides of the car do not have crumple zones, which means we are much more vulnerable in side-on collisions.

Technological advancement is constantly making our cars safer and safer. A modern car can protect its occupants, if they use their seat belts, in a frontal collision at speeds up to 65-70 km/h and in a side-on collision at speeds up to 45-50 km/h. However, if the technical equipment available (seat belts, airbags, head restraints and backrests etc.) is not used or is used incorrectly, much of the protection that the car's body provides is lost. 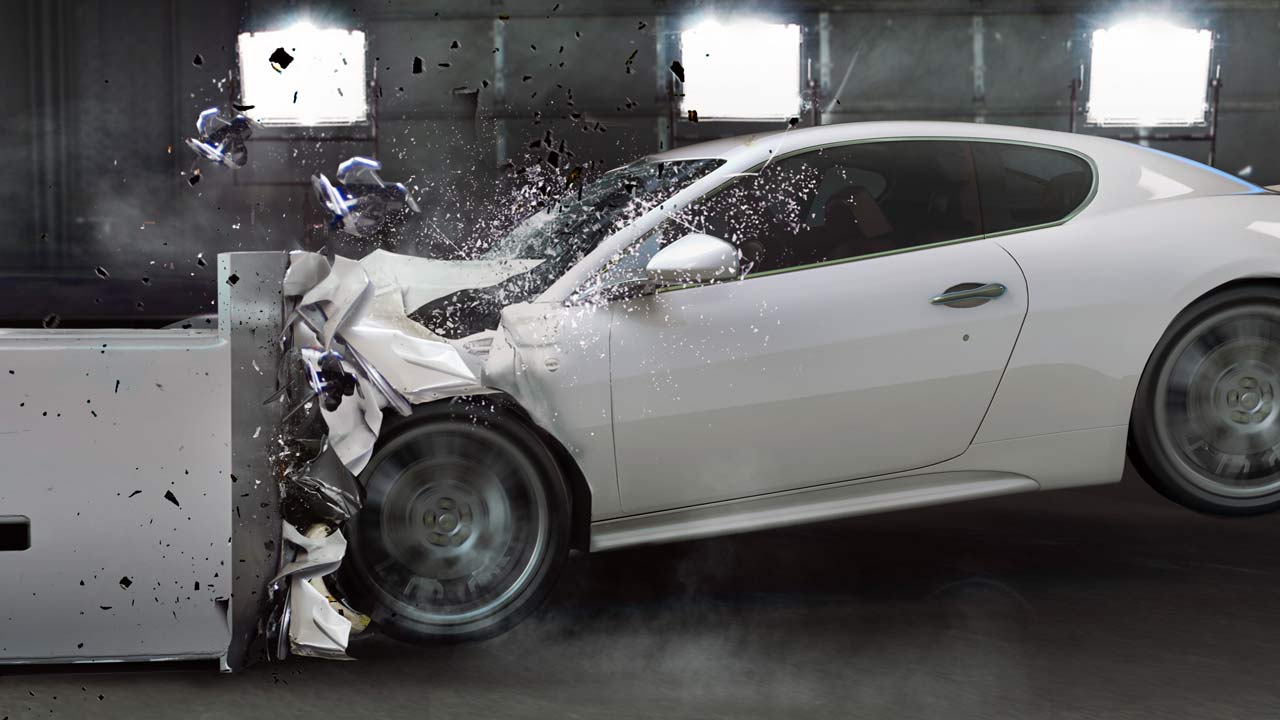 As a driver, you must ensure that everyone in the car uses a seat belt correctly, that head restraints and backrests are correctly adjusted and that all cargo is correctly positioned and secured. In the case of children under the age of 15, you as a driver are required by law to ensure that they are properly protected in the car. Failing to do so may lead to a fine. 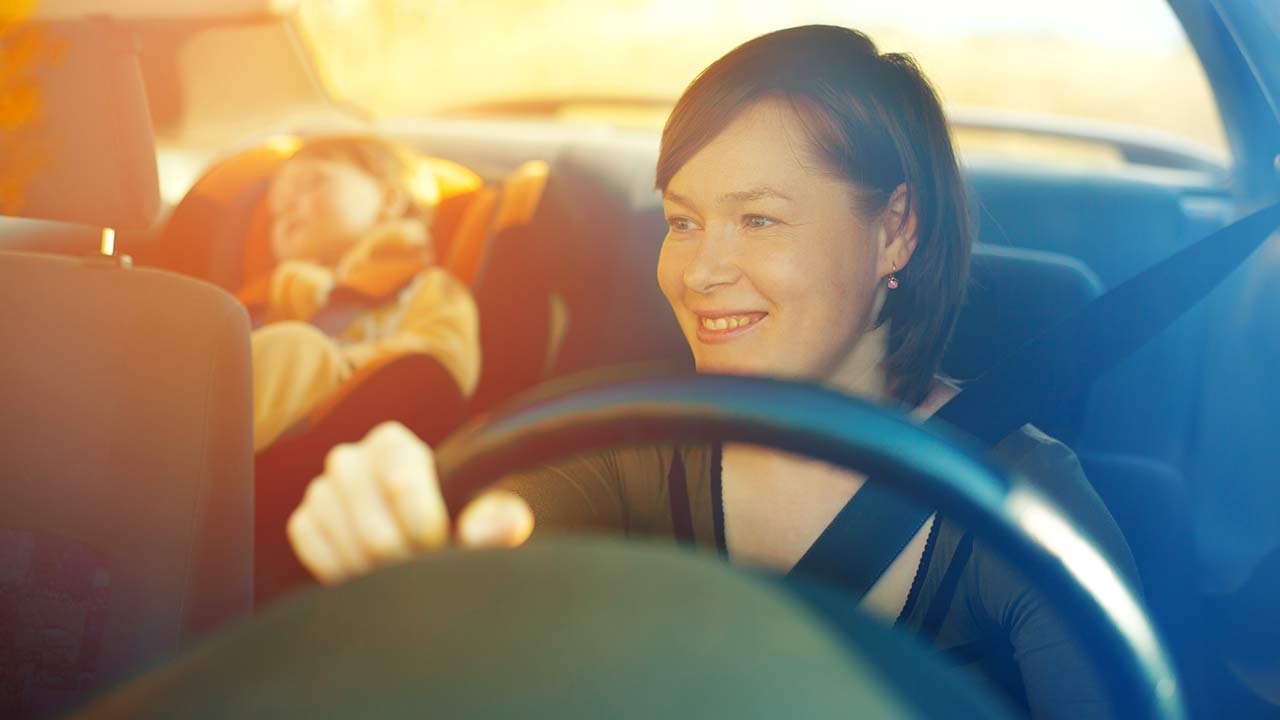 As a driver, you are responsible for ensuring that children in the car who are under the age of 15 wear a seat belt or sit in the right type of child safety device

A seat belt is designed to minimize damage during a collision or a sudden stop by keeping the car's occupants positioned correctly. It also ensures that the occupants are not thrown out of the car or hit the dashboard or other parts of the car's interior.

Wearing a seat belt and wearing it correctly is the most important protection in the event of an accident. By wearing a seat belt, the risk of being killed or seriously injured in a collision is halved.

When fastening a seat belt, consider the following: 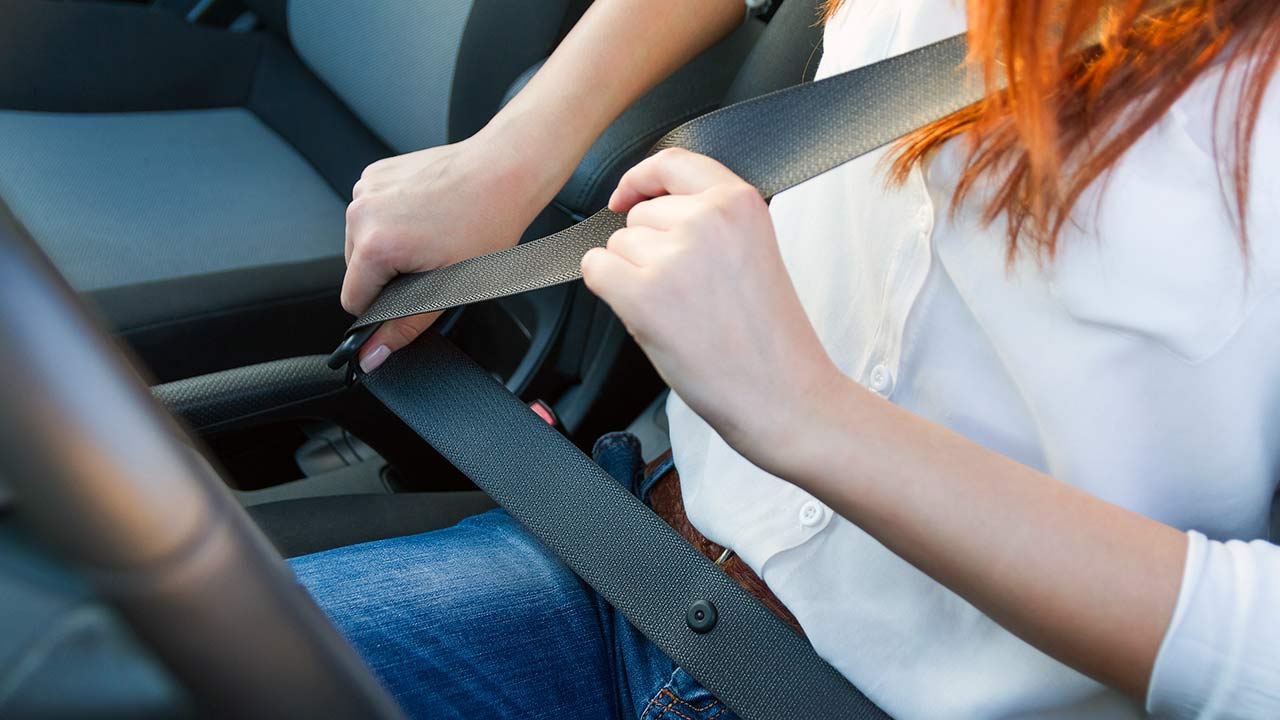 In Sweden, the law requires everyone travelling in a car to wear a seat belt. However, wearing a seat belt is not required in the following cases:

In the best case scenario you can manage a collision at 7 km/h while not wearing a seat beat without being harmed. At higher speeds than that you must wear a seat belt in order to stand a chance, as the forces simply become too powerful. About 40% of all drivers and passengers killed in traffic accidents did not use a seat belt.

For everyone's safety, everyone in the car must be securely fastened. A passenger in the rear seat without a seat belt is not only endangering him or herself, but those in the front as well. A collision at 40-50 km/h is enough for an unbelted rear-seat passenger to be slammed forward with enough force to kill the driver or front-seat passenger. 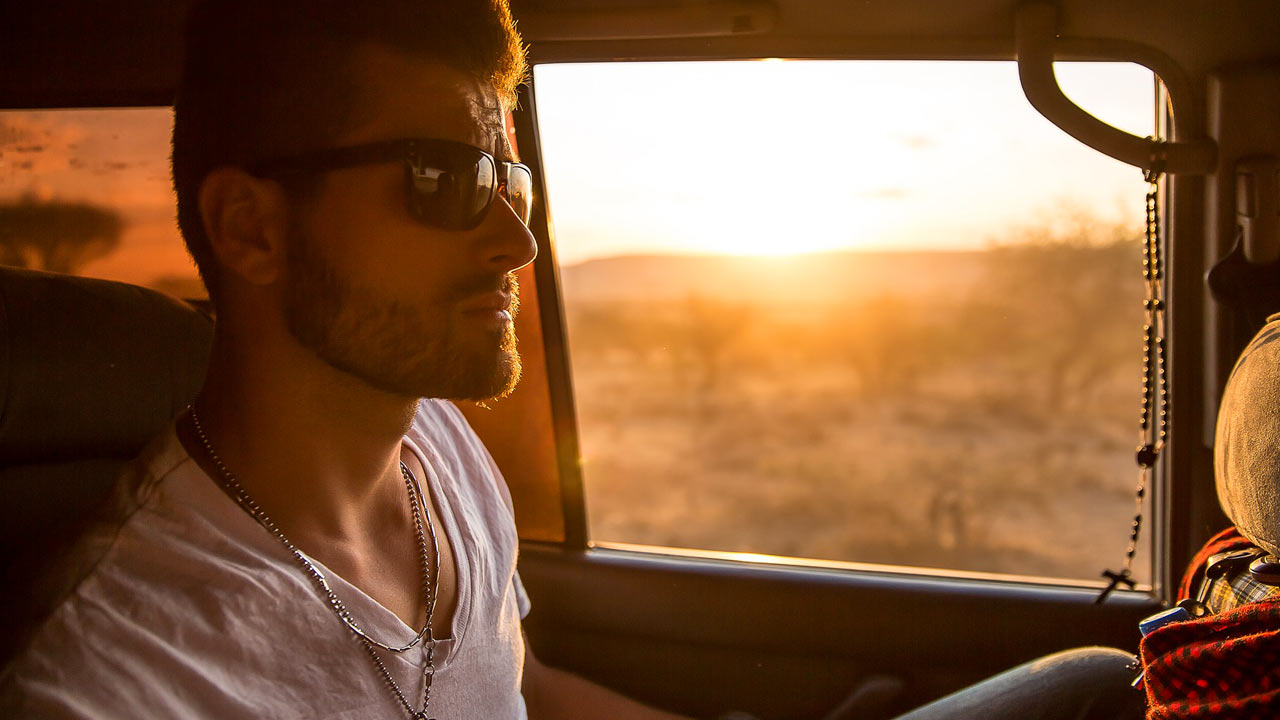 The force a body is exposed to in a frontal collision is enormous. The impact is often compared to falling from a high-rise building.

A frontal collision at:

The B class licence gives you the right to drive vehicles other than cars. Some of these vehicles do not have seat belts, such as many mopeds and three and four-wheeled motorcycles. When driving such a vehicle, you must use an approved helmet instead. 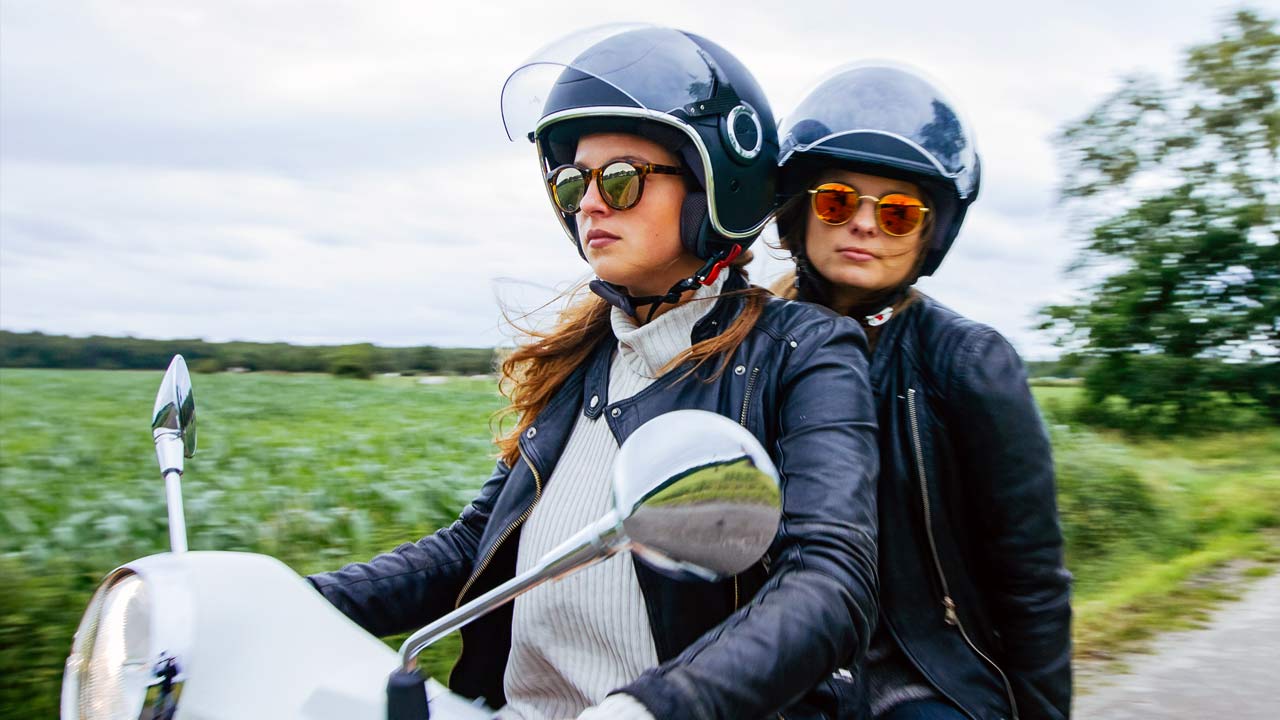 When driving a vehicle that does not have a seat belt, you must use an approved helmet instead

The helmet must be E marked and approved according to ECE22:05 or ECE22:06. It is your responsibility as a driver to ensure that passengers under the age of 15 use an approved helmet.

The helmet must also be used correctly: it must sit firmly on the head and be well fastened under the chin. Not using a helmet or not fastening the helmet properly increases the risk of death or serious injury in case of an accident. 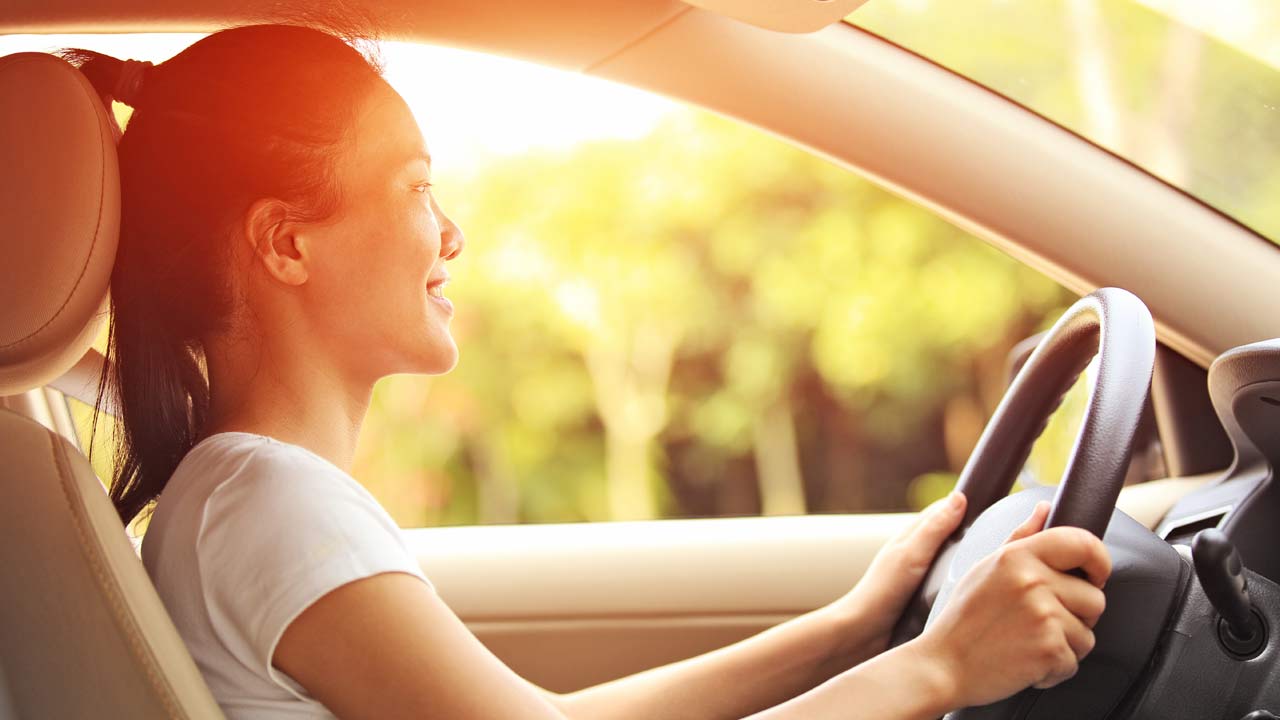 A properly adjusted head restraint prevents the head from being thrown backwards during a collision, and is an important protection against neck injuries

To reduce the risk of such injuries it is important to maintain distance to the vehicle ahead. It is also important that you and your passengers adjust both head restraints and backrests correctly:

If you realize that your car will be hit from behind, press your head against the head restraint and look straight ahead.

An airbag's main task is to protect against face and chest injuries. Airbags are hidden protective cushions that inflate quickly in the event of a more severe collision. In modern cars, there are often airbags in three places: in the driver's seat, in the passenger seat and on the sides.

An airbag is an effective complement to a seat belt, not a replacement. On the contrary, if you do not wear a seat belt when an airbag inflates you will be dangerously close to it. If your face gets in the way during an airbag's split-second deployment it can cause serious or even fatal injuries. 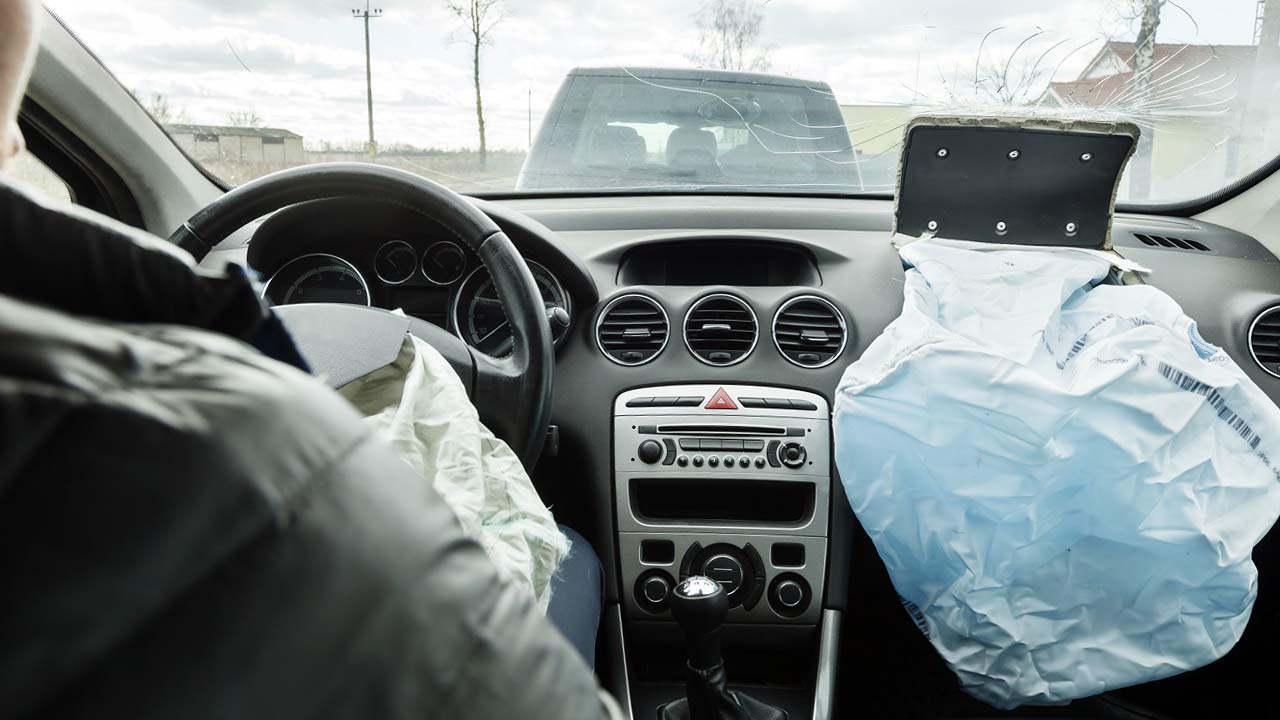 Children in the car

The car and the car's protective systems are adapted for adults. Children are smaller than adults, making them more vulnerable during a collision. Therefore all children under 135 cm must sit in a child safety device. Always use child safety devices marked E or i-Size and never place a child safety device in a seat with frontal airbag protection. Side airbags do not present a hazard to children.

Although the law does not require it, doctors and researchers recommend that children use booster seats or booster cushions up to the age of 10-12.

Remember that it is the responsibility of the driver to make sure that passengers under 15 wear seat belts or sit in the right type of child safety device.

0-9 months, or until they can sit steadily: Baby seat 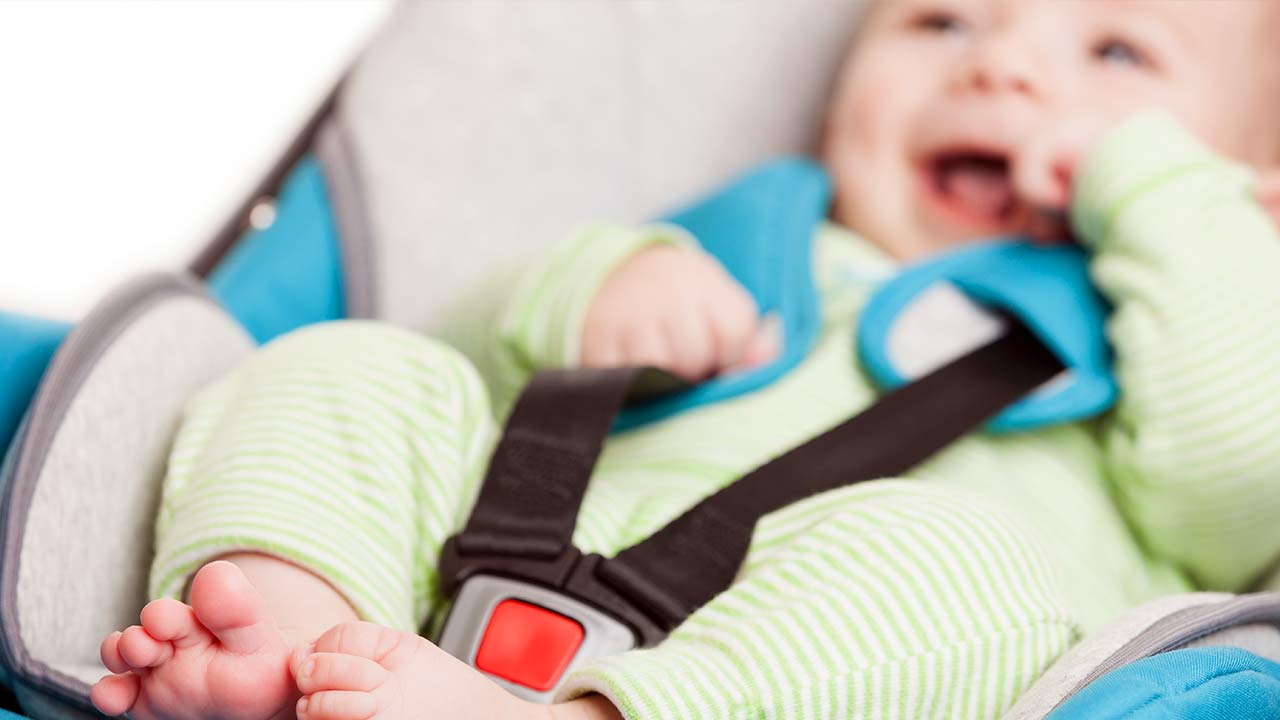 Babies should sit in a baby seat

From 7 months up to about 4 years: Backward-facing child seat

Many safety experts recommend that children use a backward-facing child seat for as long as possible, preferably to the age of 5 years.

From about 4 years to 135 cm: Booster seat or booster cushion 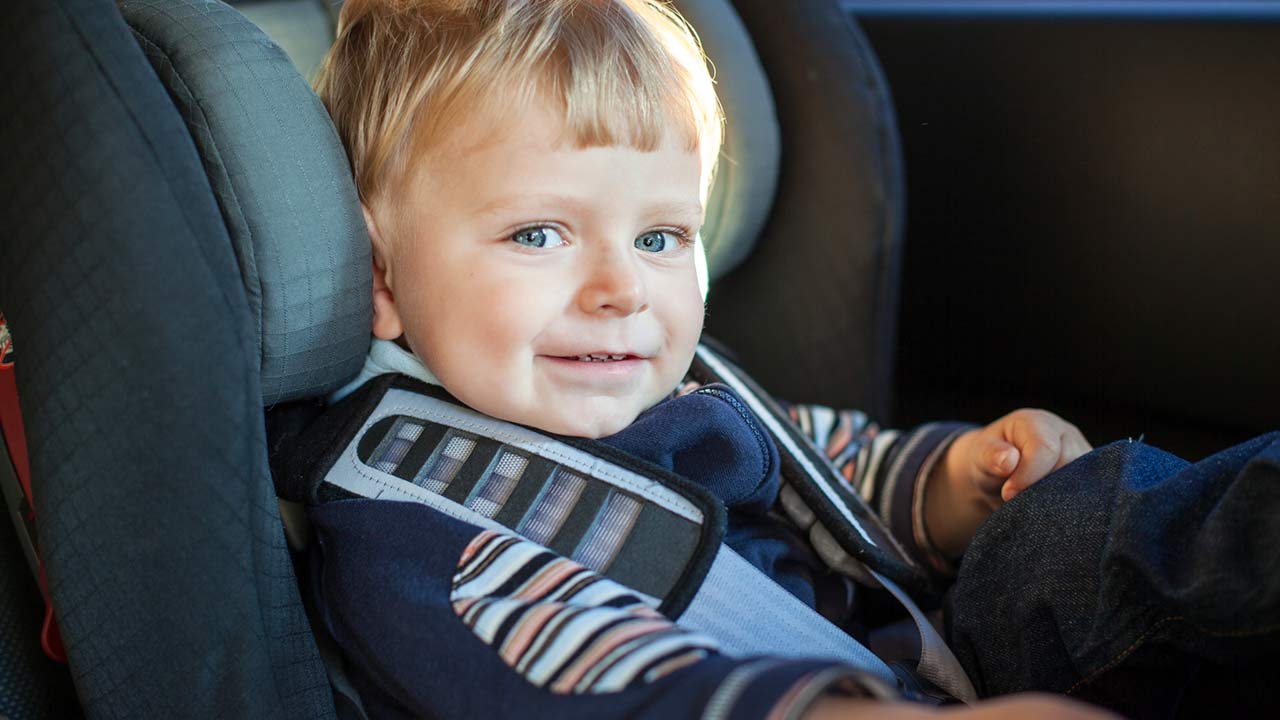 Exceptions: The basic rule states that all children under 135 cm must sit in a child safety device, but there are two exceptions:

When loading a car it is very important not to exceed the maximum load. The maximum permitted load is stated in the car's registration certificate. The driver does not count as load, but any passengers in the car do.

Even if a car has the highest rating in all safety tests and everyone in the car is wearing a seat belt, no one is safe in a collision if there are loose objects lying around in the car. Therefore you must always ensure the car is loaded correctly:

In the event of a collision, heavy objects that are loaded incorrectly in the baggage compartment can penetrate through the backrest. Lighter objects can also turn into deadly projectiles if they are loose in the car. 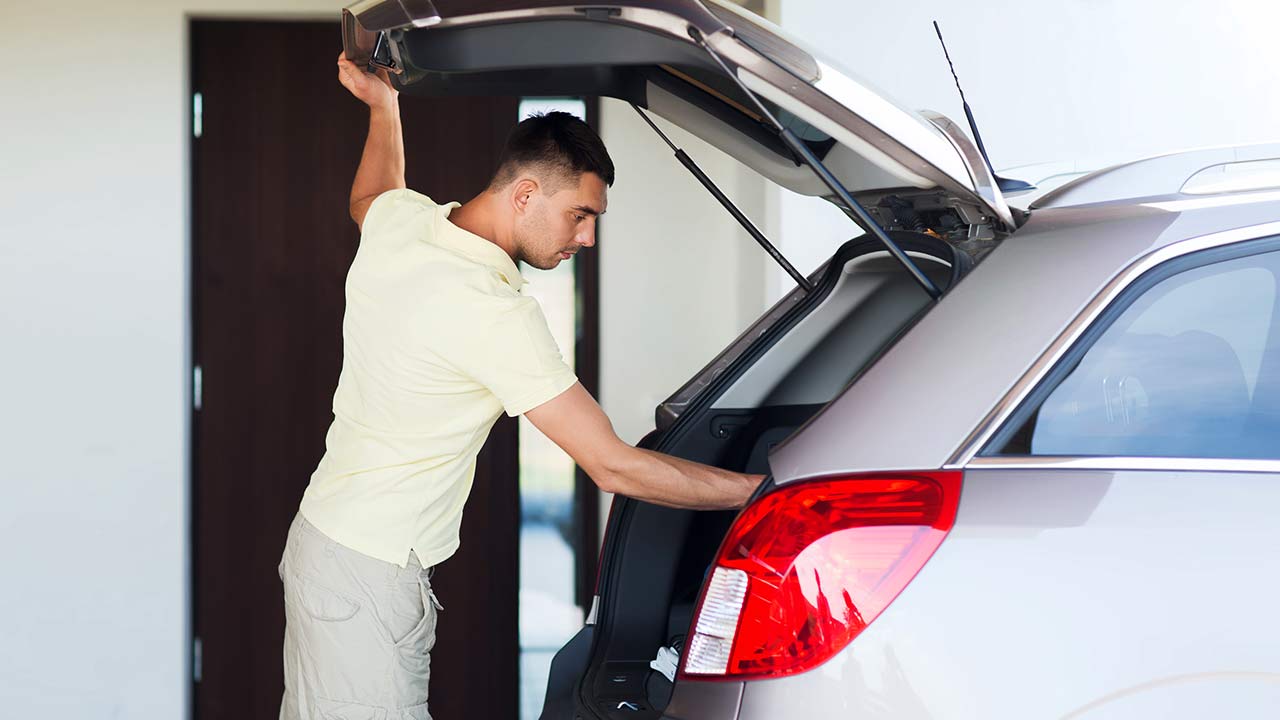 The passengers' weight (but not the driver's) is included in the car's maximum permitted load. This means that you are probably not allowed to transport a lot of cargo if you have several passengers in the car.

To calculate how much cargo you can put in the car, if you also have passengers in the car, you simply subtract the passengers' total weight from the car's maximum load.

The picture below shows the part of a car's registration certificate containing the car's maximum load.

Avoid loading roof boxes with heavy items, which are better stored in the baggage compartment. Never pack more than 100 kg on a car's roof (the weight of the roof racks and roof box should be included).

How much you may pack on the roof of your car is stated in the instruction manual. 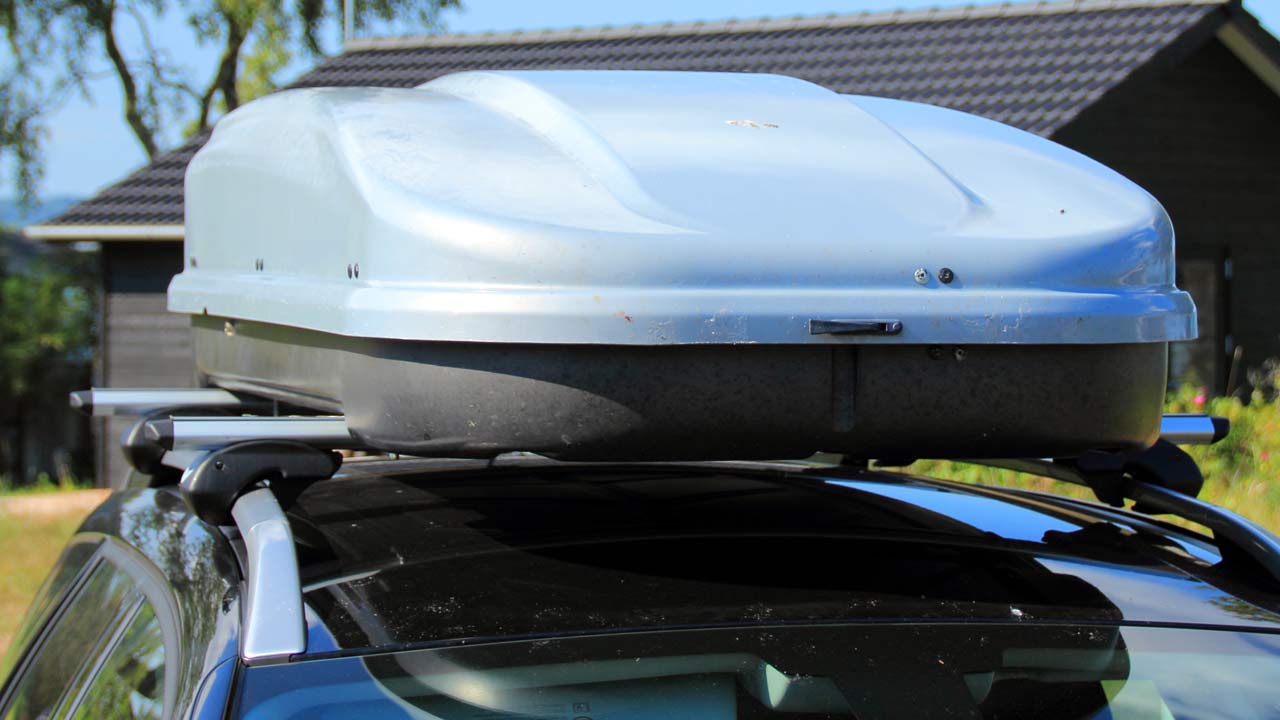 Pack light and bulky objects in the roof box, rather than heavy items

Keep the following in mind when driving with a loaded roof box:

There is a lot to consider when loading large or heavy items in or on the car, or on a trailer. The load must not diminish the car's or trailer's lighting or obstruct the view of its licence plates. Nor must the load obstruct your visibility or the manoeuvrability of the car.

Projecting loads must in some cases be marked, and loads carried on the car's roof or on a trailer must be secured so that they cannot shift or fall off. Read more about securing loads. 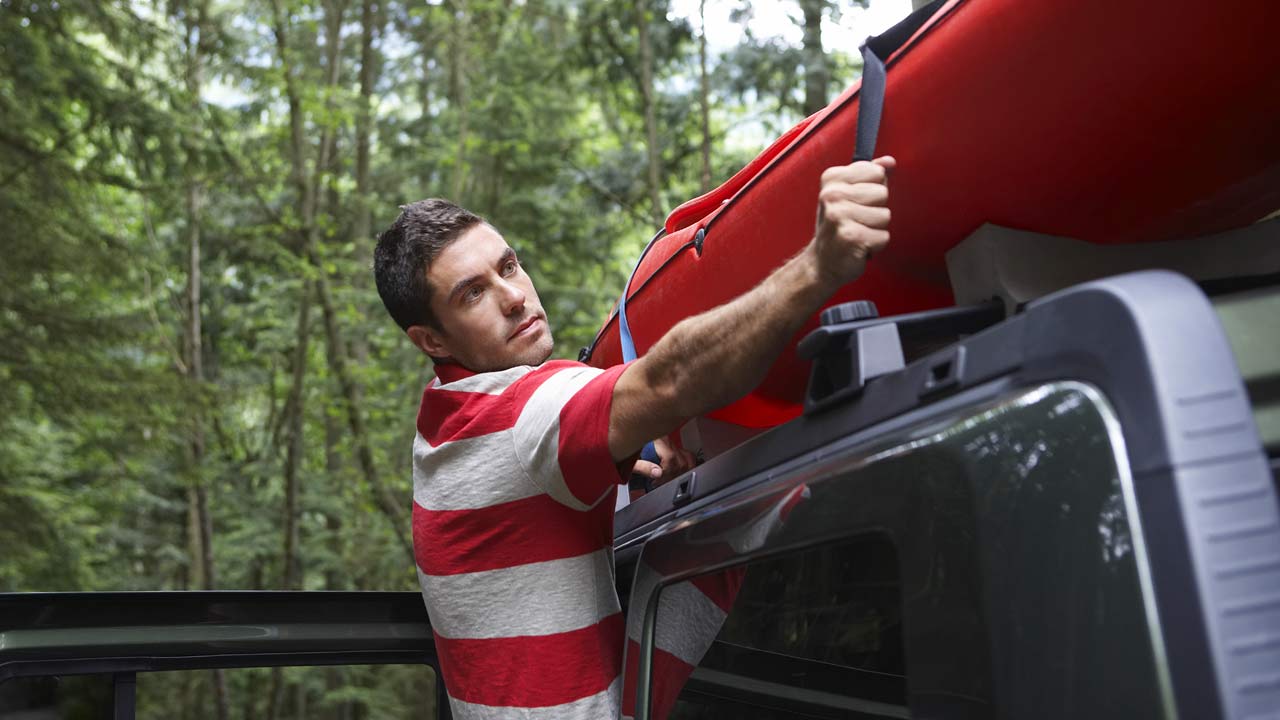 Snow and ice on the roof are considered as load

Driving with snow and ice on the car's roof is prohibited as it is considered as unsecured load. Snow and ice sheets on the roof can both slide down on the windshield, obscuring your view, and blow backwards, disturbing drivers in vehicles behind. In both cases, this can cause a serious accident.

Which loads must be marked?

A load that projects more than one metre backwards must always be marked.

A load that projects sideways does not need to be marked, but it must not project more than 20 centimetres on either side. The total vehicle width, including load, must also not exceed 260 cm.

Since the load on the picture projects more than one metre backwards and one metre forwards, it must be marked at both the back and the front

How should loads be marked?

During daylight, projecting loads should be marked with a red-yellow flag at both the front and the rear.